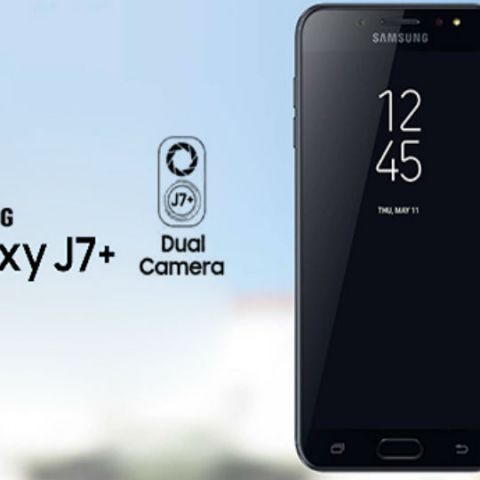 The Samsung Galaxy J7+ will be the next smartphone from the South Korean company to feature a dual camera setup and a dedicated Bixby button. The handset has leaked in Thailand and it seems to sport a design similar to the Galaxy J7 (2017) but with dual cameras. The handset is expected to debut in Thailand soon.

In terms of the features, the Galaxy J7+ is tipped to sport a dual camera setup with a 13MP primary camera setup and f/1.7 aperture, along with a 5MP secondary sensor with f/1.9 aperture. The dual camera will support Samsung's new Live Focus mode, a feature similar to Portrait Mode that debuted first on the Note 8. There is also a 16MP selfie camera, like the company's C series.

Apart from the dual camera, the handset also seems to feature a dedicated Bixby button on the left. The smartphone could be the fourth device after the Galaxy S8, Galaxy S8+ and the Galaxy Note 8 to get this feature. Bixby is Samsung's digital assistant that supports features like voice, vision, home, and reminder. The voice function was rolled out to over 200 countries last week.

The Galaxy J7+ could feature a 5.5-inch full HD Super AMOLED display and is expected to use company's own octa-core Exynos 7870 chipset. It is likely to offer 4GB RAM, 32GB storage and support expandable storage via SD card slot. The dual-SIM smartphone will also include a front-mounted fingerprint sensor and is expected to be backed by a 3000mAh battery. The Galaxy J7+ will run Android 7.1.1 Nougat based on TouchWiz UI and will be available in black, gold and pink colour variant. There is no word on the pricing and availability of the smartphone just yet.