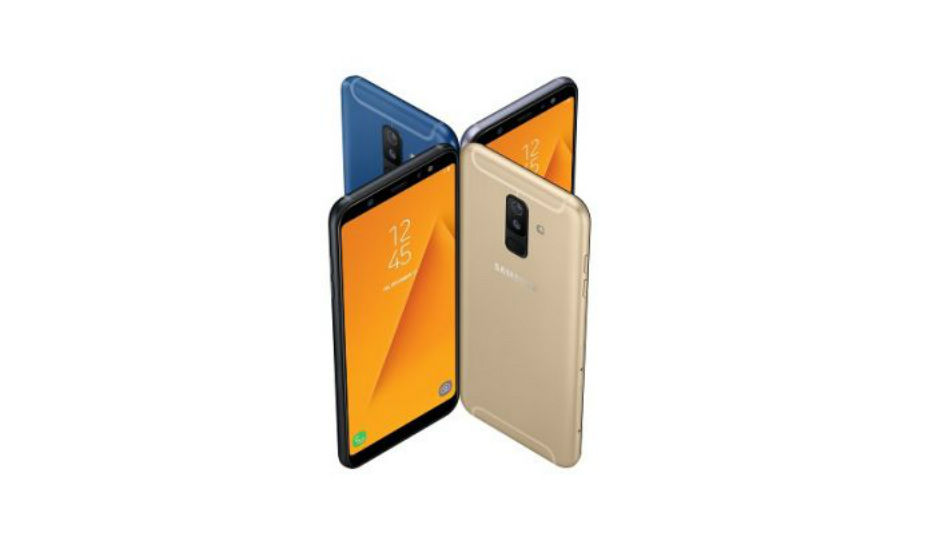 Samsung has launched four new smartphones in India. These include devices in the Galaxy J6, J8, A6 and A6+. All four of the devices come with the company’s Infinity Display design, which the company claims to offer 15% more display area, without increasing the overall size. The devices come with an in-display home button, while the fingerprint sensor is located at the back of the device. The new A-series of devices feature a metal unibody design, while the J-series of devices offer a polycarbonate unibody. Further, all four devices come with Samsung’s Super AMOLED display. The company has also introduced a new Chat-over-Video feature that lets users chat through a transparent chat window and keyboard, while a video is running.

The Samsung Galaxy A6+ sports a 6-inch Full HD+ display and is powered by a Snapdragon 450 SoC. At the back of the device is a dual-rear camera setup consisting of a 16MP sensor with a f/1.7 aperture lens and a 5MP sensor with a f/1.9 aperture lens. At the front is a 24MP unit sporting a f/1.9 aperture lens. The device offers 4GB of RAM, along with 64GB of storage which can be expanded by up to 256GB via a microSD card. The Samsung Galaxy A6+ is equipped with 3500mAh battery and runs Android Oreo. The device is priced at Rs 25,990.

The Samsung Galaxy A6 sports a slightly smaller 5.6-inch HD+ display and is powered by the company’s Exynos 7 series processor with 4GB RAM. The phone sports a single 16MP cameras on the front and back of the device, with the rear senor sporting a f/1.7 aperture lens. The Galaxy A6 is equipped with a 3000mAh battery and runs Android Oreo. The device is available in two variants. The 32GB storage variant is priced at Rs 21,990, while the 64GB variant is priced at 22,990.

The Samsung Galaxy J8 sports a 6-inch HD+ display and is powered by a Snapdragon 450 SoC with 4GB of RAM. The phone features a dual-rear camera setup with 16MP+5MP cameras at the back, while at the front is a 16MP unit. The phone offers 64GB of storage and is equipped with a 3500mAh battery. The Galaxy J8 runs Android Oreo and is priced at Rs 18,990.

The Galaxy J6 is the most affordable phone of the lot, and offers a 5.6-inch HD+ display. The phone is powered by the Samsung’s Exynos 7 series processor and sports a 13MP camera at the back, while at the front is an 8MP unit. The device is equipped with a 3000mAH battery and runs Android Oreo. The Samsung Galaxy J6 is available in two variants. The 3GB RAM/32GB storage variant is priced at Rs 13,990, while the 4GB RAM/64GB storage variants is priced at Rs 16,490.