The Samsung Galaxy J3 (2017) smartphone has been spotted on GFXBench. The Galaxy J series is aimed at the budget end of the smartphone market and generally features modest specifications. As per the listing, the smartphone sports a 5-inch HD display and is powered by a quad-core Exynos 7570 SoC with 2GB of RAM. At the back of the device is a 12MP camera, while at the front is a 5MP unit. The smartphone offers 16GB of inbuilt storage and runs Android Nougat, The same device was also spotted on Geekbench running the same processor, and scored 631 and 1858 in the single-core and multi-core tests respectively. 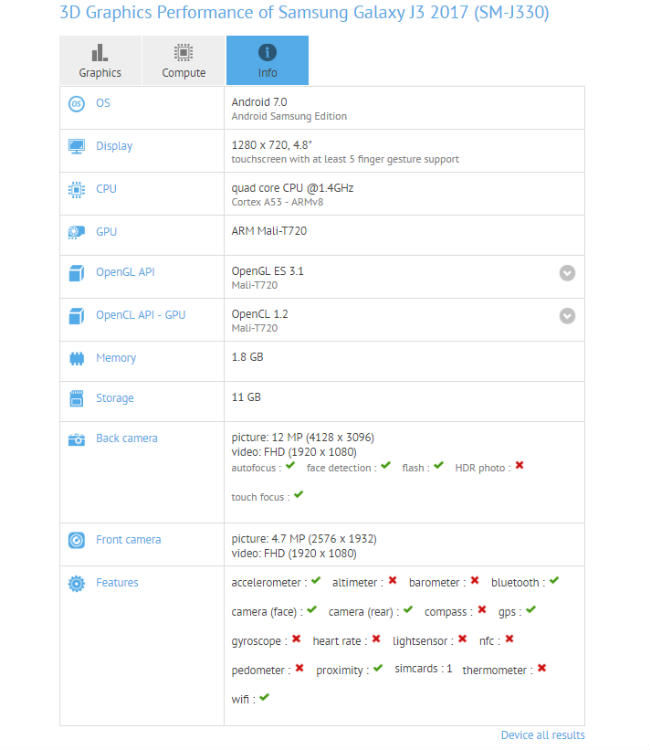 The 2016 version of the Samsung Galaxy J3 was launched in India in March 2016. The device sports a 5-inch HD AMOLED display and was powered by a 1.3GHz quad-core processor with 1.5GB of RAM. The phone has an 8MP rear and 5MP front camera. It offers 8GB of storage and is equipped with a 2600mAh battery. The company later unveiled an updated version of the smartphone called the Galaxy J3 Pro. The new version of the phone was pretty much the same as the standard version, expect it offered 2GB of RAM and 16GB of storage.