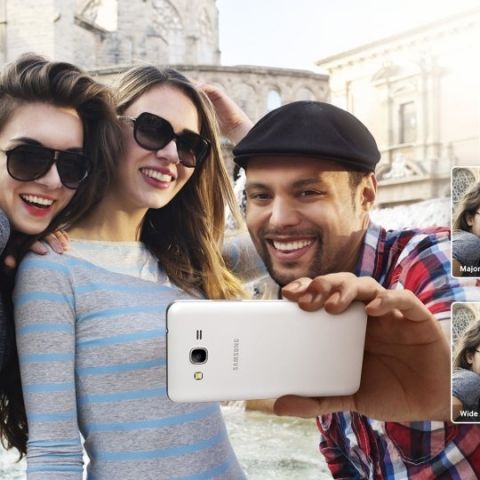 Samsung has launched a slew of new devices including three new mobile phones and one business tablet at its Samsung Forum 2015. The three new mobile phones launched are – Samsung Galaxy Grand Prime 4G, Samsung Core Prime 4G and Galaxy J1 4G. Samsung's new phones come with 4G support and will be available in India from the second week of March 2015 from Rs. 9,900 onward.

First up is the Samsung Galaxy Grand Prime 4G. It has 5-inch qHD display. It comes with 5MP front-facing camera with an ultra wide view angle and 8MP rear camera with LED flash. The smartphone is powered by a Quad-core, 1.2GHz Qualcomm Snapdragon 410 processor along with 1GB of RAM. It comes with 8GB of internal storage, supports microSD for additional storage. It is powered by a 2600 mAh battery.

The Galaxy J1 has a 4.3-inch WVGA TFT display. It comes with 5MP auto focus rear camera with LED flash, and 2MP front-facing camera. The Galaxy J1 comes with 4GB of internal storage, supports expandable storage up to 128GB via microSD. For connectivity, the smartphone supports dual-SIM, Wi-Fi b/g/n with Wi-Fi Direct, Bluetooth 4.0, and GPS. It is powered by an 1850 mAh battery.

Samsung is evidently now targeting the 4G smartphone segment amid reports that is losing grip in the Indian market. Even as competition continues, the company needs to revisit its strategy for the Indian market, which of late has proffered high spec'd budget phones over just budget phones.

“In 2015, we plan to introduce path-breaking technology across different categories of products, which will enhance consumer experience and strengthen our position in the market,” said Mr. HyunChil Hong, President and CEO, Samsung India Electronics

Mr. Asim Warsi, Vice President - Marketing, Mobile & IT at Samsung India said, “India is at the cusp of its digital revolution journey and we expect 4G technology to rise and push internet usage to an unprecedented level. Consumer demand is constantly shifting towards devices offering multi-tasking capabilities, 24X7 data connectivity with increased video consumption and real-time mobility solutions which enable global interactions. Samsung Electronics is poised to drive the next step of Smartphone evolution by offering a comprehensive portfolio of quality 4G LTE enabled devices and propel the next wave of business and economic growth.”

At the Samsung Forum, the company introduced a new business tablet – Galaxy Tab Active. The tablet measures slim(9.75mm) and comes with replaceable battery. The tablet offers anti-reflective, high brightness 400 nit touch screen display. The Tab Active has an 8-inch LCD screen and is powered by 1.2GHz quad-core processor with 1.5GB of RAM. It has IP67 dust and water resistant certification. Check out the full specifications of the Galaxy Tab Active here.

Samsung has also upgraded quality of its curved UHD TVs & announced the SUHD curved TV. The new SUHD TV will include nano-crystal technology for higher contrast and a wider range of colours

“SUHD TV’s nano-crystal semiconductor transmits different colors of light depending on their size to produce the highest color purity and light efficiency available today. This produces a wider range of more accurate colors with 64 times the color expression of conventional TVs. The SUHD re-mastering engine automatically analyzes the brightness of images to minimize additional power consumption while producing ultimate contrast levels. This ensures much darker blacks and an elevated brightness 2.5 times brighter than conventional TVs,” explains Samsung in a release.