Samsung Galaxy Fold has a distinct crease in the middle, hands-on video shows 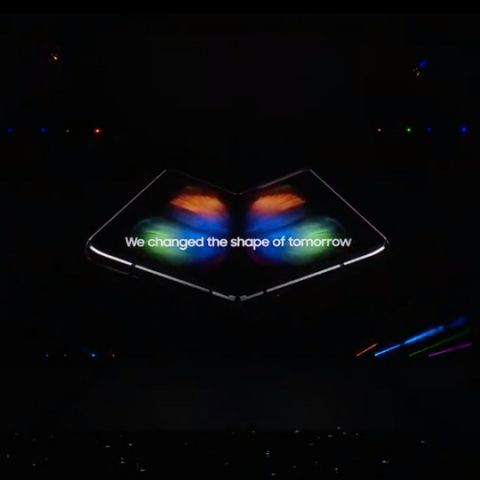 Back in February, Samsung announced the Galaxy Fold, the company's first foldable smartphone. The phone definitely marked a big moment in smartphone history, but so far we only saw the device from Samsung's hands. The company showed a demo of the phone's workings at the launch event in San Francisco and then later, it released a well-edited video of the device in action, giving a deeper glimpse into how the foldable design works. Now, a video on YouTube posted by a Vietnamese tech blog allegedly shows the Galaxy Fold being used. The Galaxy Fold is in the hand of a user in the video and it shows how the phone bends and opens to become a tablet and a phone back again.

If you look closer, you will notice the Galaxy Fold has a distinct crease where the display folds, when it's in tablet mode. Furthermore, the bezels around the display when it's in phone mode are particularly noticeable. When unfolded, the Galaxy Fold's 4.6-inch display becomes a 7.3-inch panel. However, in the previous demos of the phone released by Samsung, the crease was invisible. It was also clear that the Galaxy Fold doesn't really fold completely and there's a gap that remains when in phone mode.

While the Galaxy Fold is certainly a revolutionary device in terms of its design, there is still work left to do to make it perfect. The device is also not the only one of it's kind. The Galaxy Fold has the Huawei Mate X and the TCL Dragonhinge for company.

As mentioned above, the Samsung Galaxy Fold features a 4.6 inch HD+ Super AMOLED display with a resolution of 840x1960 pixels. When opened, the phone turns into a 7.3-inch tablet with a "Dynamic AMOLED display" and a resolution of 1536 x 2152. Under the hood, it has a “7nm processor” with 12GB of RAM. The phone will come with 512GB of UFS 3.0 storage. The phone draws power from the two batteries that Samsung says will act as one. The total capacity for the battery is 4380mAh.

In terms of camera, the Samsung Galaxy Fold features six cameras. The cover camera is a 10MP camera with an aperture of f/2.2. The rear triple cameras consist of a 16MP Ultra-Wide lens with an f/2.2 aperture,  a 12MP Wide-angle lens with Dual Pixel AF, OIS, and dual aperture of F1.5/F2.4. Lastly, there is a 12MP Telephoto Camera with PDAF, OIS, F/2.4 to offer 2X optical zoom. The front-facing dual cameras are a 10+8MP combo with apertures of f/2.2 and f/1.9 respectively.