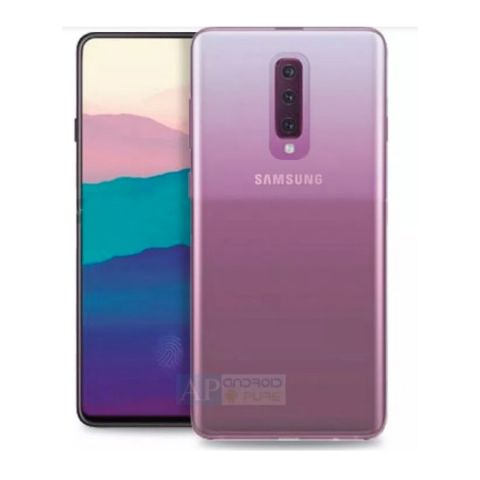 Contrary to previous reports which said that the Galaxy A90 will have a pop-camera setup with a rotating mechanism, the latest leak shows three cameras centrally aligned on the back panel and a separate pop-up selfie camera setup.

There are several leaks regarding Samsung's upcoming Galaxy A90 making the rounds on the internet. The latest leak somewhat confirms what recent reports have been claiming. Android Pure has released the renders of the phone showing a rear triple camera setup, an in-display fingerprint sensor, and a pop-up selfie shooter -- a first for the South Korean company. The phone is said to be the most premium device in the Galaxy A-Series.

Calling it the 'First Look' of the upcoming Samsung Galaxy A90, the images show the phone featuring a vertically aligned camera in the centre of the back panel. The camera setup is accompanied by an LED flash and below it is the Samsung branding. The display of the phone is near edge-to-edge with a small chin. The volume rocker and the power button are seen on right edge, and the left edge sports a Bixby button.

The photo also show the presence of an in-display fingerprint sensor, however, there is no word on what type of sensor - an optical or an ultrasonic -- is incorporated in the phone. The top edge shows a slit in the centre which is speculated to be the pop-up selfie camera. This is contrary to earlier reports which claimed that the Samsung Galaxy A90 will come with sliding and rotating cameras that can be used to click selfie and regular photos with the help of the same set of camera.

When it comes to the specification, there are no concrete reports on the hardware of teh Galaxy A90, but rumours suggest that the smartphone may use the yet to be announced Snapdragon 700 series mobile platform which is referred to as the ‘Snapdragon 7150’. Since it is speculated to be the most premium device in the series, it could ship with 6GB of RAM and 64GB of local storage. It should run Android 9.0 Pie based OneUI, 3500mAh to 4,000mAh battery.