Samsung Galaxy A80 headed to India later this month, now available for purchase in select markets 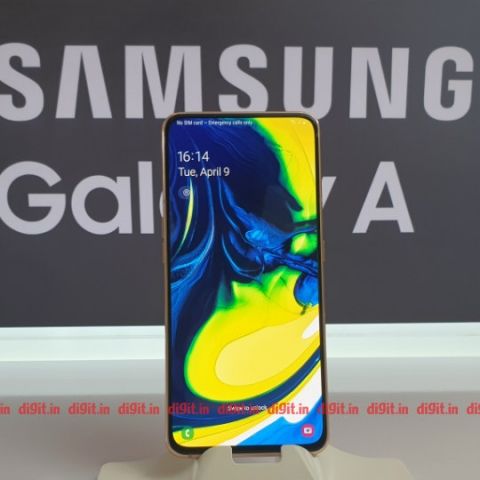 It is powered by Qualcomm’s new mid-range Snapdragon 730G SoC.

The device comes with 128GB of onboard storage which cannot be expanded.

Samsung Galaxy A80, which is the company’s approach towards a bezel-less device, is now available for purchase in select markets. Originally, the device was to go on sale in markets like Asia, Australia, China, Europe, Hong Kong, Middle East, New Zealand, and Russia by the end of May. However, the same was delayed and it is only now going on sale in select European markets, including Spain and Switzerland.

The major highlight of Galaxy A80 is its rotating camera module which houses a triple camera setup. The phone also features the brand new Snapdragon 730G SoC which was announced back in April.

While the official India launch date has not yet been announced by Samsung, IANS has reported citing Samsung's Product Planning Group's Head of Innovation, Yeon Jeong Kim, that Samsung is bringing its Galaxy A80 to India later this month.

Samsung Galaxy A80 specs and features

The Samsung galaxy A80 stands tall at 6.7-inches. The phone features a Super AMOLED panel with a display resolution of 1080x2400 pixels. The ‘New Infinity Display’, as Samsung calls it, comes with an aspect ratio of 20:9.

Further, the device is powered by Qualcomm’s new mid-range Snapdragon 730G SoC, built on the 8nm technology. The Adreno 618 GPU inside takes care of the graphics performance on this device. It is equipped with 8GB RAM and 128GB onboard storage, with dual SIM support too. The Galaxy A80 runs Android 9 Pie with the One UI on top.

In the camera department, the Galaxy A80 features a triple camera setup housed in a rotating module which also acts as your selfie camera. The camera setup features a 48MP primary sensor with f/2.0 aperture, the secondary 8MP sensor comes with an ultra-wide-angle lens (123-degrees) and finally a TOF 3D camera with an f/1.2 aperture comes as a depth sensor.

Sadly, the 128GB storage on the device isn’t expandable via microSD. Apart from this, the device packs a 3700mAh battery which can be charged via 25W fast charging.

As far as the pricing is concerned, the device should be priced somewhere around Rs 50,800, given that the device carries a price tag of EUR 649.