Samsung Galaxy A8+ (2018) with dual front cameras to launch in India soon, will be Amazon exclusive 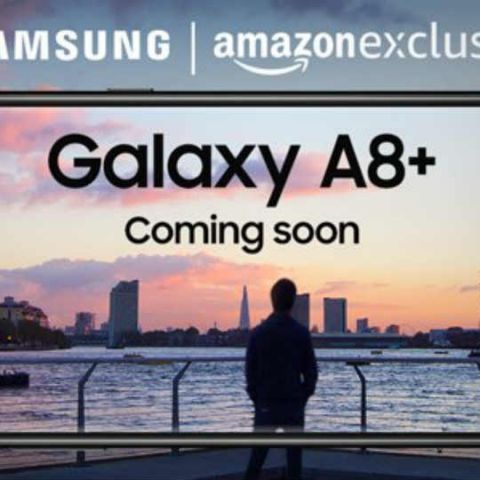 Samsung will soon launch its new Galaxy A8+ (2018) smartphone in India. Amazon has put up teasers for the smartphone on its website, which also notes that the phone will be exclusive to the online retails. However, it’s not yet known when the phone will be launched but, it should be sometime this month itself. Further, it is not yet known if the company will launch the Galaxy A8 (2018) alongside the Galaxy A8+ (2018).

To recall, the Galaxy A8 (2018) and the Galaxy A8+ (2018) were unveiled last month and are the first non-flagship smartphones by Samsung to offer an 18.5:9 display aspect ratio. The Galaxy A8+ (2018) sports a 6-inch Super AMOLED display with a resolution of 2220 x 1080 pixel. The smartphones are powered by an octa-core Exynos 7885 SoC. The global Samsung website states that the Galaxy A8+ will be available in 4GB RAM and 6GB RAM variant, but it is not yet known if Samsung will launch both variants in India.

At the front of the phone is a dual-camera setup consisting of 16MP and 8MP cameras. Both cameras will sport f/1.9 aperture lenses, but the 8MP camera will offer an 85-degree field of view. At back of the phone is a 16MP camera with a f/1.7 aperture lens. The Galaxy A8 (2018) is pretty much the same as the Galalxy A8+ (2018). The major difference being a 5.6-inch FHD+ Super AMOLED display. Further, both device offer IP68 certification.