Samsung Galaxy A20 goes on sale in India today: Specs, price, launch offers and all you need to know 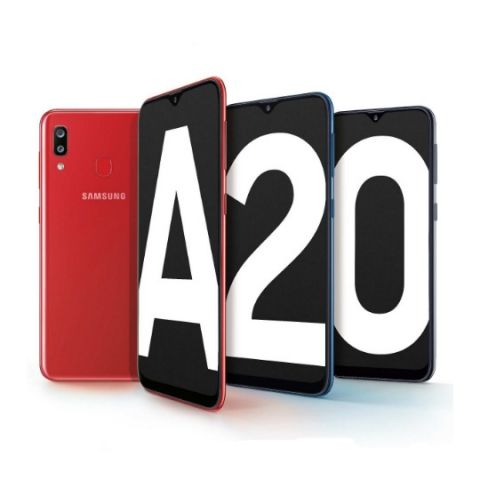 Galaxy A20 goes on sale today.

The handset comes with 3GB RAM and 64GB internal storage.

The Samsung Galaxy A20 sits between the already launched Galaxy A10 and Galaxy A30 smartphones.

Samsung recently announced its new Galaxy A20 smartphone in India and it goes on sale today. The new handset sits between the already announced Samsung Galaxy A10 and the Galaxy A30. Highlights of the phone include a large 4000mAh battery and an Infinity-V display design, which is Samsung’s moniker for a waterdrop notch display. The new handset by the South Korean smartphone maker features a dual-rear camera setup and runs on the company’s One UI that is based on Android 9 Pie. Let’s take a look at the phone’s specifications and its pricing and availability.

The new Galaxy A20 is a mid-range handset by Samsung that runs on the Exynos 7884 octa-core SoC. It comes with 3GB RAM, which is coupled with 64GB of onboard storage that can be expanded by up to 512GB via a microSD card. It sports a 6.4-inch HD+ Super AMOLED Infinity-V display with a 720x1560 pixels resolution. As mentioned, the device runs on Samsung’s One UI, which is based on Android 9 Pie and features a rear-mounted fingerprint sensor.

In terms of optics, the Galaxy A20 comes equipped with a dual-rear camera setup. It sports a 13MP + 5MP sensor configuration on the back with the 5MP sensor fitted with an ultra-wide lens. On the front, it gets an 8MP sensor. The handset runs on a 4000mAh battery that supports 15W fast charging with USB Type-C connectivity.

The Samsung Galaxy A20 is priced at Rs 12,490 and will be available in Red, Black and Blue colours. While the phone is supposed to go on sale via  Samsung Opera House, the Samsung online store, major e-commerce sites, as well as retail stores, the company has not revealed the exact time when it will be made available. As of writing this article, the phone is not listed on any major ecommerce platforms or the Samsung online store.