The phone is seen featuring Exynos 7884 SoC and 2GB of RAM.

It reportedly scores same points as the Galaxy A10.

Samsung has refreshed its smartphone strategy to gain the lost market share. Under the new scheme of things, the company is populating every segment with various smartphones. One such phone is the Galaxy A10e that has now appeared on Geekbench. The phone with model number SM-A102U is seen sporting an Exynos 7884 mobile processor, along with 2GB of RAM. The phone is seen running Android 9 Pie. The phone scores 1,163 points in the Single-Core test and 3,581 points in the Multi-Core test on Geekbench.

Interestingly, the Galaxy A10e scores similar points as the Galaxy A10. The Galaxy A10 has the same Exynos 7884 chipset, which is coupled with up to 3GB RAM. In the case of Galaxy S10 Series, we have seen that Samsung has kept the key hardware in Galaxy S10e same as its larger variants. The main difference is in the display size and the number of cameras. The company is likely to repeat this trend with the Galaxy A10e. 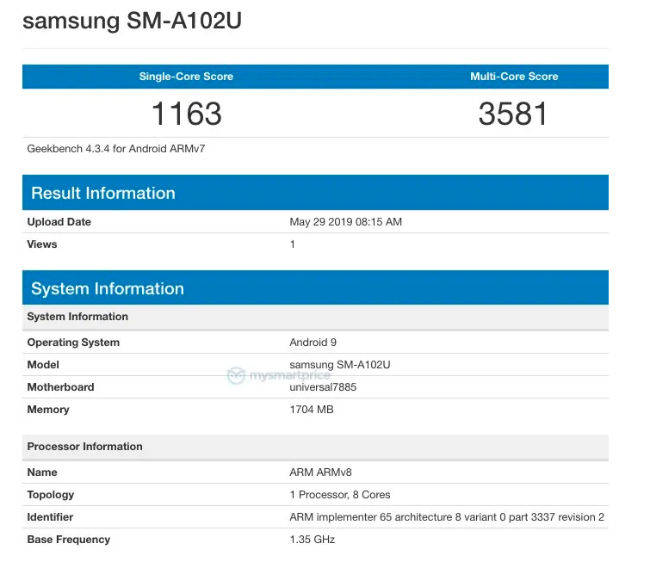 The Samsung Galaxy A10e has already been certified by the Bluetooth Special Interest Group (SIG), Wi-Fi Alliance and was also spotted at the FCC website hinting at an imminent launch. The FCC website showed that the phone will have a battery with model number EB-BA202ABU. Reportedly, this battery pack has a 3000mAh capacity - down from 3,400mAh battery of the Galaxy A10.

The Galaxy A10 has already been launched in India. As mentioned, the entry-level smartphone is powered by the Exynos 7884 chipset, which is coupled with up to 3GB RAM. It features a 6.2-inch HD+ Infinity-V display. In the camera department, the phone comes equipped with a single 13MP rear sensor with a lens having a f/1.9 aperture. On the front the phone has a 5MP selfie shooter.