All three Galaxy A series smartphones go on sale on March 2. 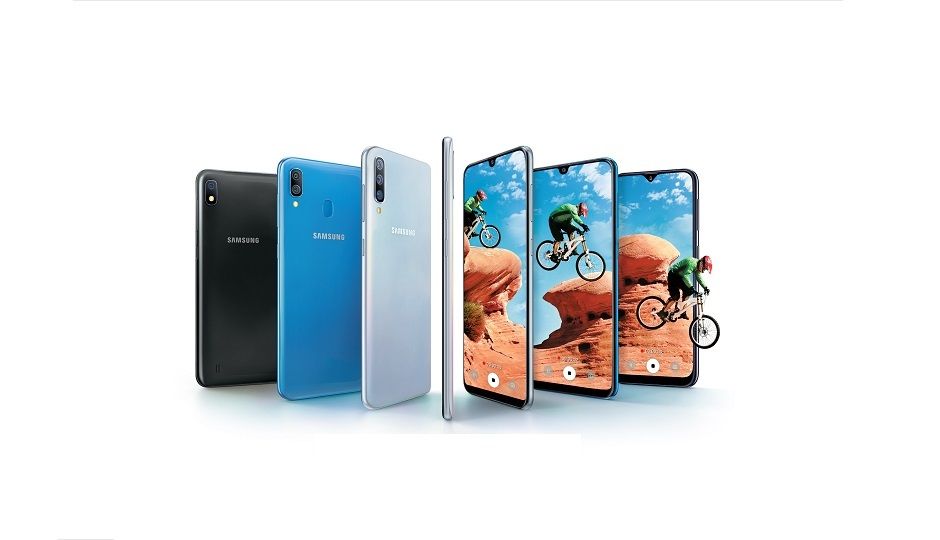 Samsung has launched three new smartphones in the entry-level and mid-range segments, under its Galaxy A-series brand. The three new models are the Galaxy A10, Galaxy A30, and Galaxy A50, which are priced starting at Rs 8,490, Rs 16,990, and Rs 19,990 respectively. While the Galaxy A30 and Galaxy A50 come with what the company calls an Infinity-U display, the cheaper Galaxy A10 sports an Infinity-V display design. All three models will go on sale in India from March 2.

The Galaxy A10 is the entry-level model among the three new A-series phones. It has a 6.2-inch HD+ Infinity-V display, which means the tiny notch on the top of the display is V-shaped. For optics, it gets a single 13-megapixel rear camera with an f/1.9 aperture along with a 5-megapixel selfie camera in the front, which supports face recognition. It's powered by an Exynos 7884 chipset and up to 3GB of RAM. The battery on it is a 3,400mAh unit. When on sale, the Galaxy A10 will be available in red, blue, and black colours.

The Galaxy A30 sits between the Galaxy A10 and the Galaxy A50 in Samsung’s new Galaxy A series. The smartphone features a 6.4-inch Super AMOLED Infinity-U display, which means the little notch on top of the display is U-shaped. It’s equipped with a fingerprint scanner on the back and a 4,000mAh battery, which is juiced up using a 15W fast charging technology. Optics are taken care of by a dual camera setup on the back (16-megapixel camera with an f/1.7 aperture and a 5-megapixel camera with an f/2.2 aperture), including a wide-angle lens. The Galaxy A30 is powered by an Exynos 7904 chipset with an octa-core processor and 4GB of RAM. When launched, the Galaxy A30 will be available in red, blue, and black colours.

The Galaxy A50 is the top-most variant of the three models here. It comes equipped with a 6.4-inch Full HD+ Super AMOLED Infinity-U display, which according to Samsung, allows for a 91.6-percent screen-to-body ratio. It is equipped with a triple camera on the back: an 8-megapixel ultra-wide lens with a 123-degree field of view, a 25-megapixel main camera with an f/1.7 aperture, and a 5-megapixel depth sensor with an f/2.2 aperture. The smartphone uses Samsung’s Intelligent Scene Optimizer to adjust contrast, brightness, and colour optimally.

The Galaxy A50 is powered by an Exynos 9610 chipset with an octa-core processor and up to 6GB of RAM. The fingerprint scanner is found under the display. The battery on the handset is a 4,000mAh unit with 15W fast charging capability (through USB Type-C). When launched, the Galaxy A50 will be launched in blue, black, and white colours and 64GB of internal storage. The Galaxy A50 will be available in two variants: a 4GB RAM variant, priced at Rs 19,990 and a 6GB RAM, priced at Rs 22,990. All three models will go on sale starting March 2.

Related Read: Redmi Note 7 Pro with 48MP camera launched in India alongside Redmi Note 7: Price, Specs, and all you need to know