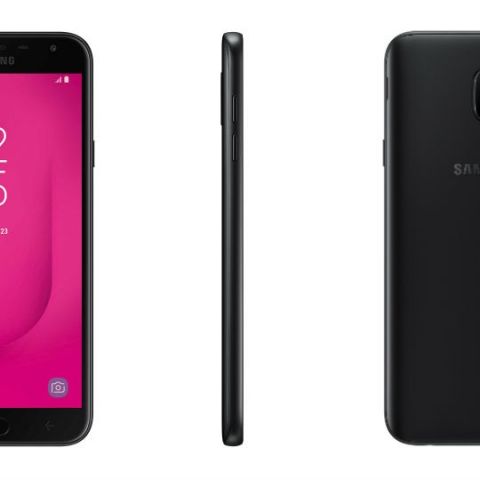 After launching the Galaxy J6, J8, A6 and A6+ in India just last week (Read First Impressions), Samsung has now launched the Galaxy J4 in the country. The smartphone is aimed at selfie enthusiasts and comes with an adjustable front LED flash which accompanies a 5MP front camera.

Unlike the J6 and J8, the Galaxy J4 does not feature an Infinity Display design. Instead, it comes with a 5.5-inch HD Super AMOLED display, with a 720 x 1280 pixels resolution and a 16:9 aspect ratio. For its processing needs, the Galaxy J4 uses an Exynos 7570 quad-core platform clocked at 1.4GHz. At the back is a 13MP camera with an F1.9 aperture. This entire package is powered by a 3,000 mAh battery.

In a press release announcing the new device, Samsung added that it includes a ‘Made In India’ feature for memory management. Called ‘Advanced Memory Management’, the feature helps users save space by automatically redirecting images and videos from social media applications to the external memory card. Advanced Memory Management also helps in keeping the device memory clean by deleting duplicate images received on social media messengers.

Further, the Galaxy J4 comes preloaded with Samsung Mall, a service that lets users shop by clicking a picture of the desired product and automatically getting results for the item across popular e-commerce platforms. There’s also an 'App Pair' feature, which opens a consumer defined pair of apps simultaneously in two multi windows for faster multitasking. Another 'Adaptive Wi-Fi' feature helps the Galaxy J4 turn Wi-Fi on and off automatically depending on the location.