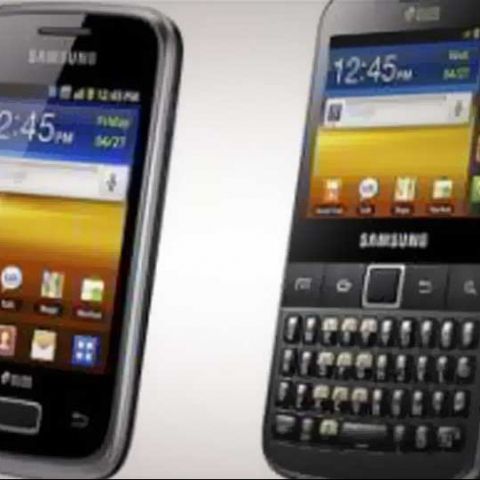 Both devices are roughly identical two their single-SIM counterparts, with the exception of the Duos branding, as well as slightly larger batteries, slightly different displays, and more RAM. Both Galaxy devices have Android 2.3 Gingerbread onboard, ~830MHz processers, 384MB of RAM, 512MB of ROM, 2GB microSD card (supports up to 32GB), and 3.15MP cameras.

The Galaxy Y Pro Duos on the other hand, has the same sized screen, with a higher resolution than its single-SIM variant, at 400x240 pixels. It also has a front-facing VGA camera in addition, as well as 1,350 mAh battery, and weighs in at roughly 112 grams.

Other common specifications between the two devices include such connectivity options with 7.2Mbps HSDPA, Wi-Fi 802.11 b/g/n with hotspot functionality, GPS with A-GPS support, Bluetooth 3.0 with A2DP, microUSB v2.0, a 3.5mm audio jack, and stereo FM radio with RDS.

Both Duos phones also come with the ChatON instant messaging app, as well as Samsung's Social Hub, on the TouchWiz UI. Also onboard, is the Polaris Office document editor, as well as Find My Mobile, for locating or remote locking/wiping the devices. 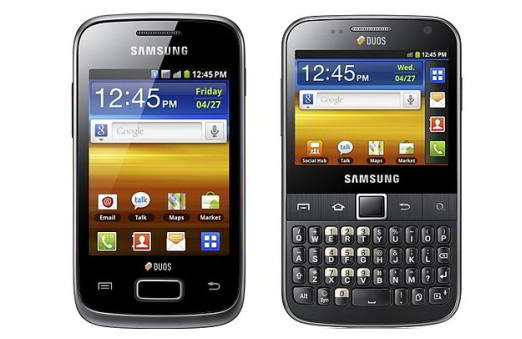