Redmi K20 confirmed to be company’s next flagship phone, might launch as Poco F2 in India

Redmi K20 confirmed to be the name of company’s upcoming flagship phone.

The Redmi K-series is expected to debut with the K20 and the K20 Pro.

One of these phones is rumoured to launch as the Poco F2 in India.

Redmi is expected to soon announce its new flagship smartphone that is confirmed to run on Snapdragon 855 SoC. Rumours suggested that the handset could be called the Redmi X but the company’s GM Liu Weibing dispelled them by saying that the phone would be named something ‘better’. Now, in a new Weibo post, the official confirms that the device will be called the Redmi K20 and states that the new ‘K’ series will consist of the company’s flagship phones. A previous report about the company’s new series suggested that there might be two models, the Redmi K20 Pro and the K20. One of these phones is now rumoured to be launched as the Poco F2 in India.

The Redmi K20 Pro is expected to be the flagship phone by Redmi with a Snapdragon 855 SoC. On the other hand, the Redmi K20 is touted to run on a Snapdragon 700 series chipset, which is rumoured to be the Snapdragon 730. Since Xiaomi wants to undercut the competition with its Poco series, the Redmi K2 Pro is most likely to launch as the Poco F2 (if the rumours turn out to be true). Spec sheet of the Redmi flagship was recently leaked online, which alongside the Snapdragon 855, hints at a 6.39-inches Full HD+ display. The device could feature Gorilla Glass 5 protection and is confirmed to sport an in-display fingerprint sensor. 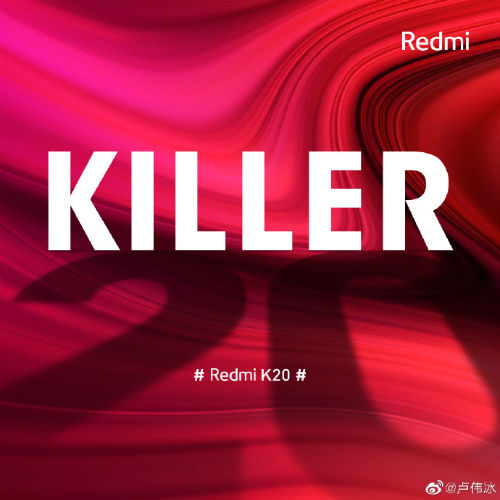 Xiaomi is teasing a pop-up camera module on the Redmi K20, which will reportedly house a 20MP sensor. On the back, the handset might sport a triple rear camera setup with a 48MP main, 8MP ultra-wide and a 16MP telephoto camera. It could be backed by a 3600 mAh battery that might support 27W fast charging. In terms of variants, the upcoming Redmi handset is touted to launch with 6GB and 8GB RAM models with options to select from 64 GB, 128 GBand 256 GB of storage. Since most key specs of the phone are rumoured or based on leaks, we suggest you take them with a pinch of salt.