The devices are priced in a similar price bracket. 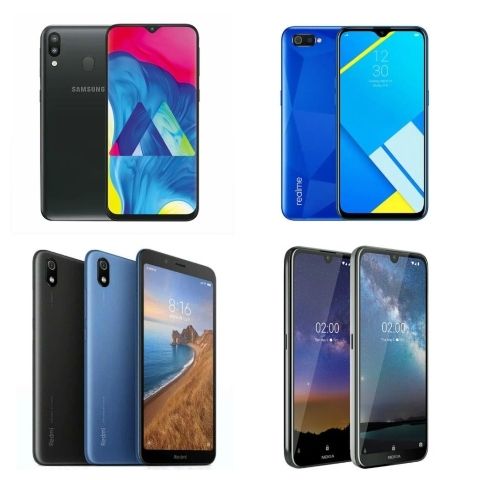 Redmi has launched the Redmi 7A(₹ 5999 at amazon) in India to compete in the already highly populated entry-level smartphone market in India. Before launching it in India, Redmi had unveiled the phone in China. Except for the camera, all the specs remain the same as they are in the Chinese version of the device. Its competitors, the Realme C2(₹ 6944 at Tatacliq), the Samsung Galaxy M10(₹ 8990 at flipkart), and the Nokia 2.2(₹ 5799 at flipkart) are already present in the market since long. Let’s see how the latest entrant fares against its competitors on paper. 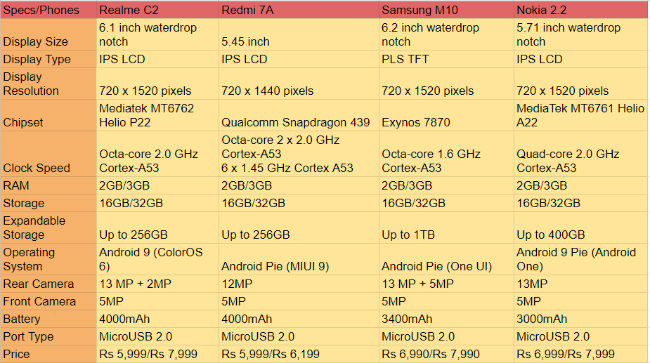 Out of the four devices listed here, the Samsung Galaxy M10 sports the biggest display, which measures 6.2 inches diagonally. This is followed by the Realme C2’s 6.1-inch display. Nokia, a reliable name in Indian households, ships its Nokia 2.2 with a 5.71-inch panel and the Redmi 7A sports a 5.45-inch display. This means that the Redmi 7A gets the most compact form factor as compared to others. However, at a time when content consumption on mobile devices is high, customers usually prefer a bigger screen. Hence it is up to customers to choose a form factor that is best suited to them. When it comes to the type of display, IPS LCD panel and PLS TFT, which is there on the Galaxy M10, are not much different from each other.

The key difference between these phones should be the performance because all the phones feature different chipsets under the hood. We haven’t tested the Redmi 7A yet, so we’ll bring the in-depth performance comparison later. The Realme C2 has a MediaTek Helio P22 processor, which can be found in several entry-level smartphones. In comparison, the Redmi 7A features Qualcomm Snapdragon 439, the same chipset that powers the Nokia 4.2. The Samsung Galaxy M10 has an Exynos 7870 SoC and the Nokia 2.2 sports a MediaTek Helio A22 mobile platform.

There is nothing much to talk about the memory and storage here because all the devices mentioned above ship with same 2GB or 3GB RAM options and feature 16GB or 32GB storage. When it comes to expandable storage, the Galaxy M10 has the maximum support with an option to extend the storage to up to 1TB, theoretically. In comparison, Nokia 2.2 offers an option to expand storage up to 400GB. Both, Realme C2 and Redmi 7A have up to 256GB expandable storage support.

While the Realme C2 has a dual camera with a 13MP and a 2MP sensors, the Samsung Galaxy M10 comes with the 13MP sensor, paired with a 5MP one. In comparison, the Nokia 2.2 sports a single 13MP rear camera, and Redmi 7A sports a 12MP sensor, which is specially incorporated in the Indian variant.

In the battery department, Realme C2 and Redmi 7A offer the maximum -- a 4000mAh capacity battery. The Samsung Galaxy M10 houses a 3400mAh pack and the Nokia 2.2 ships with the smallest battery (3000mAh).