The Realme XT(₹ 14999 at amazon) was teased at the launch of the Realme 5 series. Today, Realme has launched the Realme XT in India. The USP of the smartphone is its 64MP rear camera. It is Realme’s first 64MP camera smartphone. Moreover, Realme has announced the Realme Buds Wireless earphones and the Realme Power Bank as well. The power bank has a capacity of 10000mAh.

The Realme XT features a 6.4-inch full-HD+ Super AMOLED display panel with a waterdrop notch at the top. According to the company, it sports a 91.9 percent screen to body ratio. It is powered by the Qualcomm Snapdragon 712 chipset. The smartphone comes in 4GB, 6GB and 8GB RAM variants, and up to 128GB of internal storage. It packs a 4000mAh battery with support of 20W VOOC flash charge 3.0 technology.

Coming to the optics, the Realme XT is the company’s first 64MP camera smartphone. It features a quad rear camera setup: a primary 64MP camera made by Samsung + an 8MP wide-angle lens + a 2MP macro lens + a 2MP depth sensor. It also has a 16MP selfie shooter.

The Realme XT comes with a USB Type-C port and a 3.5mm audio jack as well. Realme has included features like Digital Wellbeing, clone apps, system-wide dark mode and more with the new smartphone.

First online sale will be held on September 16 at 12 PM.

Realme has announced new accessories with the Realme XT at the launch event today. The Realme Powerbank has a capacity of 10000mAh. It offers 18W bi-directional fast charge, both Type C and USB A charging slots, and more. The device is priced at Rs 1,299, and will be available online from September end. 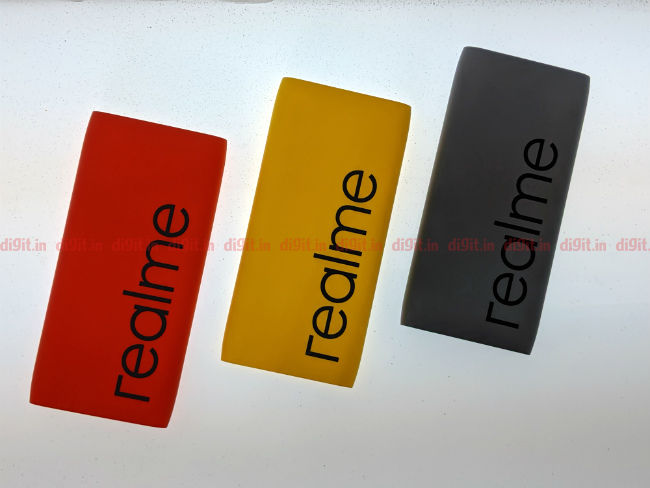 Coming to the Realme Buds Wireless earphones,  they offer an 11.2mm Driver, integrated magnets, which automatically turn on when separated. It has Bluetooth 5.0. Realme claims that they can offer a battery life of up to 12 hours.