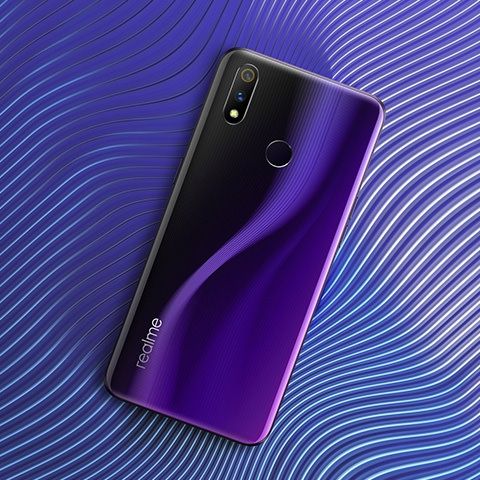 Continuing an onslaught of product launches, Realme 3 Pro is set to get a Lightning Purple variant that will go on sale in India for the first time on the midnight of May 15. The news comes straight from Realme’s CEO, Madhav Sheth, who has been very active on Twitter sharing news about the brand and its products. The announcement of the Realme 3 Pro Lightning Purple variant also comes through the same channel.

The phone’s new colour variant will be available on Flipkart and Realme’s own website starting midnight of May 15. The phone’s new colour has a gradient finish, with Purple on the right side and black on the top left. The phone also continues to use the unique vertical line design that we saw on other colour variants of the Realme 3 Pro. Depending on how the light hits the back panel, you will see a notable S being formed due to the variation in the hues on the back. 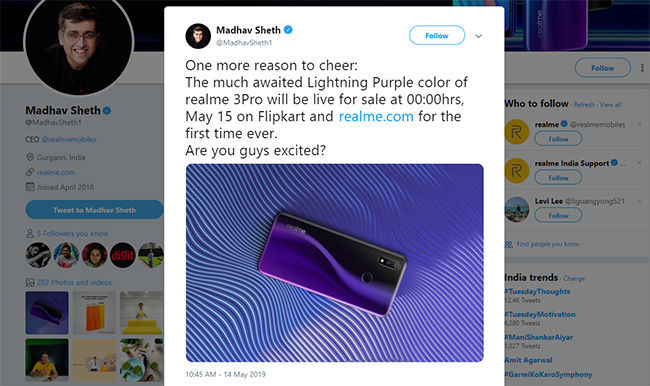 Design choice aside, the Lightning Purple variant of the Realme 3 Pro will continue to sport the Qualcomm Snapdragon 710. The RAM and storage variants will be in the 4GB RAM/64GB storage, 6GB RAM/64GB storage and 6GB RAM/128GB storage SKUs. Storage on all three variants can be expanded with the use of a MicroSD card. The Realme 3 Pro sports a dual camera configuration on the back, with a 16-megapixel primary camera with an aperture of f/1.7. The secondary 5-megapixel camera with its f/2.2 aperture is just for collecting depth information. On the front, you get a 25-megapixel camera with an aperture of f/2.0, which is housed inside the dewdrop notch on a 6.3-inch display. The screen to body ratio sits at a 90.8 percent and the resolution of the display is a comfortable FHD+.