Google has officially announced the Pixel 3a and 3a XL smartphones at Google I/O 2019 priced at Rs 39,999 and Rs 44,999. Both the smartphones are powered by the Snapdragon 670 Platform coupled with 4GB RAM. 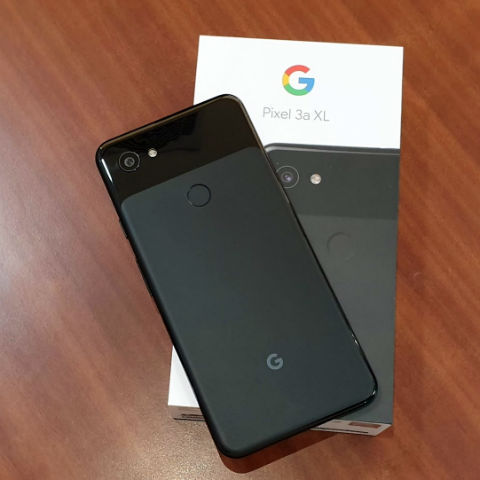 It looks like most of the information leaked about the Pixel 3a and 3a XL smartphone were true. But in case you were hiding beneath a rock up till now, here is a quick recap. Google has announced (more like confirmed), two new smartphones - the Pixel 3a and the Pixel 3a XL. The Pixel 3a has a 5.6-inch FHD+ gOLED display with an 18.5:9 aspect ratio. The Pixel 3a XL, on the other hand, has a 6-inch gOLED display with an FHD+ resolution. Both displays are protected by DragonTrail glass. What is “gOLED” and why didn't the smartphone maker go with Gorilla Glass is something we have asked the company and will update this story as soon as we have the answers. The Pixel 3a has a 3000mAh battery whereas the Pixel 3a XL has a 3700mAh battery. The rest of the specs of both smartphones are the same. They both sport a Polycarbonate unibody design, 4GB RAM, Snapdragon 670 SoC, 12.2MP Dual-Pixel rear camera with a Sony IMX363 sensor, the same found on the Pixel 3 and Pixel 3 XL, 8MP front camera and stereo speakers. The smartphones will be available in Just Black and Clearly White.

Based on the specs alone, the two ‘budget’ Pixel phones should ideally have been priced similar to a mid-range phone. However, the Pixel 3a is priced at Rs 39,999 whereas the Pixel 3a XL is priced at Rs 44,999. This pits it against high-end devices like the OnePlus 6T, Honor View 20, Samsung Galaxy S10e and others. Evidently, most of the smartphones in this price range are rocking a flagship processor. As a result, there should be a marked difference in performance between the Snapdragon 670-powered Pixel 3a devices and the other high-end rivals it aims to topple. Quite expectedly, the Snapdragon 670 cannot beat the flagship processors most phones in that price-range are rocking. But just how much of a difference does it make? We pit the Pixel 3a XL against some of the popular phones in this price range and see how well it performs. We compared the smartphones in synthetic benchmarks to give you a look at the pure numbers game along with some scientific gaming performance (we wear lab coats and gaming gear when gaming because we take our jobs seriously) and lastly, comment on some real-world performance.

For this performance comparison, we compared the Pixel 3a XL against --

This will give us an idea of how the Snapdragon 670 with its multicore AI engine,  Kryo 360 CPU  and enhanced gaming performs when compared to the Snapdragon 845, the Exynos 9820 and the HiSilicon Kirin 980.

So, let's begin by giving you the bad news. The AnTuTu benchmark didn't run on the Pixel 3a XL unit we received and even though we tried to sideload the app, pray to the tech gods and even use the Force, we couldn't make the benchmark run. We’ll update this story once AnTuTu runs on the device. Let’s kick things off with the Geekbench single core and multi-core performance. 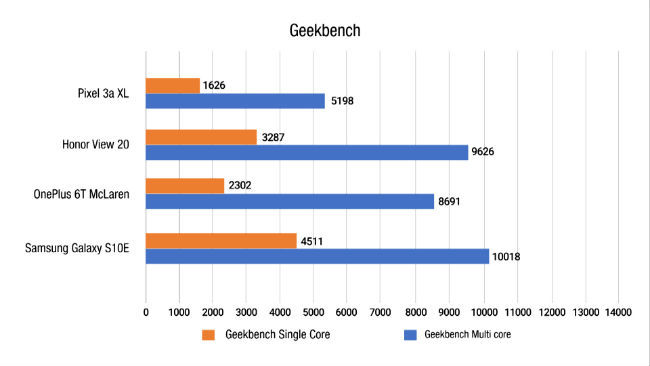 As you can see from the graph above, in the single core and multicore performance the Pixel 3a XL lags behind the competition by quite a long margin, indicating the CPU performance isn’t as fast as the flagship processors the Pixel 3a XL aims to compete against. All the other three devices, especially the Galaxy S10e, whizz past this smartphone. Even though the performance of the Honor View 20 and the OnePlus 6T are close to each other, it is the S10e which has taken the lead here. 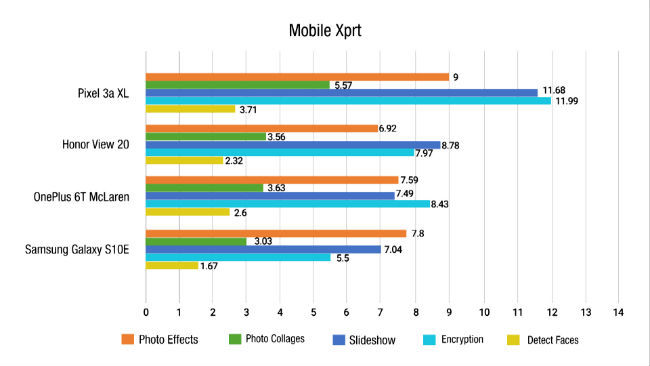 This benchmark is indicative of how the smartphone will perform if you want to make photo collages and slideshows. Even though this process may seem to happen in a heartbeat on any of these devices, delving deep into the processing capabilities of the hardware shows us once again that the S10e takes the lead. In Photo effects, the Honor View 20 does win by almost one second (remember, in this benchmark, the lower the score, the better) but in all the other tests in this benchmark, the S10e is the hare. It must be noted that the Pixel 3a XL is the tortoise here lagging behind by about 4 seconds in some cases, which is hardly surprising. 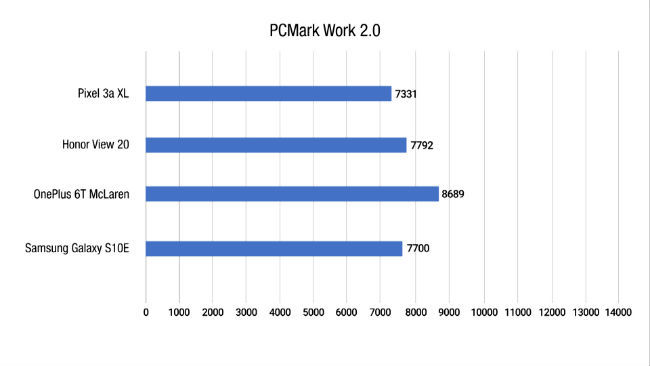 This is one benchmark where the Pixel 3a XL doesn't lag behind by a lot. It is fairly close to the View 20 and the S10e, indicating that despite having a slower CPU, the Pixel 3a XL is quite capable of handling workloads like post-processing videos, reading texts and the likes. The winner here is the OnePlus 6T with the View 20 and the S10e neck to neck with each other.

Moving over to the graphics processing and gaming, the GPU accompanying the SD 670 is the Adreno 615. Speaking of the competition, the View 20 has the Mali-G76 MP10, the OnePlus 6T has the Adreno 630 and the S10e has the Mali-G76 MP12. Adreno GPUs have generally proven to have the upper hand at least on synthetic benchmarks. However, phones like the Honor View 20 also rely on software-based enhancements like GPU Turbo 2.0 that improves the performance of certain games to an extent. 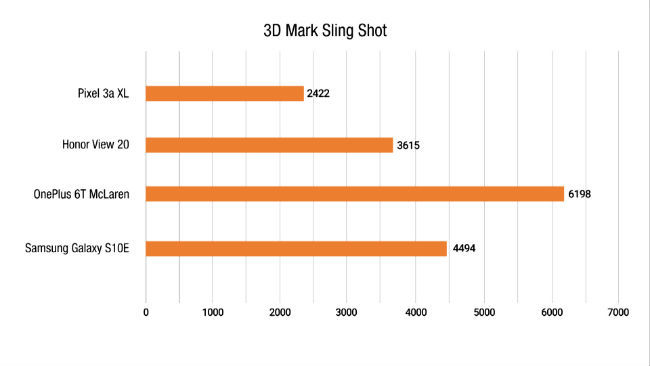 In the 3D mark Slingshot test, the OnePlus 6T blazes past the competition by quite a margin. That’s partly because of the software optimisations OnePlus has put in place. It has also proved to be the best smartphone for gaming in our lab tests. As for the others, there’s on average 1000 points difference between them. 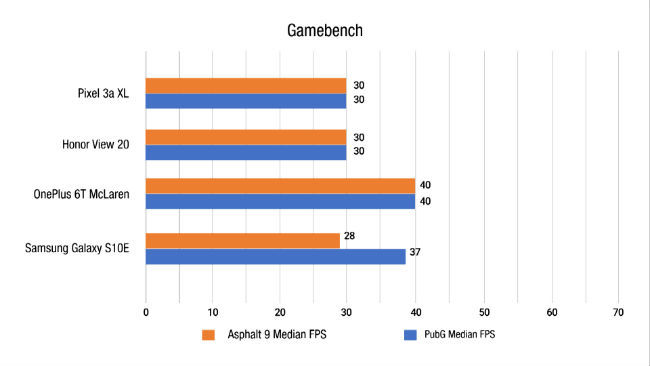 Let's move over to some real-world gaming test. We used Gamebench to not only judge the average FPS during gaming. Surprisingly, the Pixel 3a XL has a rock solid 30fps in Asphalt 9 something that even the S10e lacked. The Honor View 20 also gave 30FPS on Asphalt 9, but out of the three, the Pixel 3A XL actually was the most stable at 92 per cent. The winner, as a result, is the Pixel 3a XL giving players stable gaming experience.

On PUBG, the Pixel 3a XL maintained 30fps and was on high settings by default. The same was the case with the View 20. The OnePlus won here again with 40FPS and 99 per cent stability, closely followed by the S10e.

Below we will share some other benchmarks that we ran on the smartphones but it suffices to say that the SD 670 isn’t a flagship powerhouse. With the OnePlus 7 Pro launching in a week, it will be interesting to see how the Pixel 3a performs in that segment. Even though the Pixel 3a XL didn't blow our socks off when it comes to benchmarks, its real-world performance was good with the little time we have spent with the smartphone. The stock Android UI is comfortably smooth, apps load relatively fast and multitasking isn't a hassle. There was the occasional moment where an app froze for a second and sometimes the keyboard took a hair longer than I'd like to pop up but those are niggles in an otherwise fluid experience.

You can also, stay tuned for our review to know our in-depth analysis of the phone.

With inputs from Subhrojit Mallick