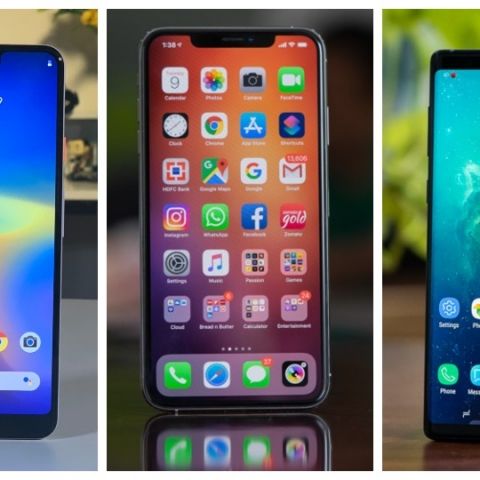 The Google Pixel 3XL, iPhone XS Max and the Samsung Galaxy Note 9 are all flagship smartphones by the respective manufacturers with top-of-the-line specs, however, how do they stack up against each other? Here’s a quick look.

Google has tossed its hat in the ring with the Google Pixel 3 and Pixel 3 XL smartphones. The two handsets go up against other flagships in the same price segment but with a larger display, the Google Pixel 3 XL (first impressions) hopes to take on the likes of the Samsung Galaxy S9 and the Apple iPhone XS Max. The Pixel 3 XL does feature top of the line specification and is bound to appeal to Android Purists who demand faster updates and stock interface. However, the iPhone XS Max and the Samsung Galaxy Note 9 have their own nuances that appeal to users. Here is a quick insight into the specifications of the three phones and how they fare against each other.

Performance, without a doubt, can make or break a person’s experience on a smartphone. Simply staring blankly into your smartphone’s display while waiting for apps to load just doesn’t cut it anymore, even more so when one is shelling out a fortune for a high-end handset. Both Apple and Samsung use their custom SoCs on their phones, while the new Google Pixel 3 XL is powered by the latest Snapdragon 845 SoC. The iPhone XS Max is powered by the Apple A12 Bionic, while the Galaxy Note 9 runs on the Exynos 9810 SoC.

While the flagship Snapdragon and Exynos processors are made using a 10nm process, the A12 Bionic is fabricated using a smaller 7nm process. This means that Apple has managed to fit more transistors in a smaller area, thus driving the efficiency up, while reducing power consumption. However, going by their respective clock speeds, the Exynos 9810 is slightly faster at 2.7GHz, as compared to the 2.5GHz on the other two processors.

All the three smartphones we are talking about here are clearly meant for people who like large displays. Both, the Pixel 3 XL and the Galaxy Note 9, feature a screen resolution of 1440 x 2960 pixels but with a 6.3-inch p-OLED and a 6.4-inch Super AMOLED display respectively. As p-OLED uses a plastic substrate as the base for the panel, it is more durable and has higher chances of sustaining a bump or drop. However, AMOLED uses a glass base to deliver a clearer viewing experience but at the same time, is less durable in comparison with a p-OLED display.

The Apple iPhone XS Max features a 6.5-inch Super Retina custom OLED display with a 1242 x 2688p resolution. Do note that Super AMOLED refers to a certain way in which the pixels are arranged in a display and even though the iPhone’s display doesn’t use that configuration, it does not mean that it is lesser than the other two device’s display. Apple also makes use of a six-channel light sensor, which it calls True Tone, to adjust the white balance in real time to match the colour temperature of the light around you.

Overall, the three phones come with similar display technologies but the respective manufacturers will surely calibrate their displays in their own way. Oh, lest we forget, the Apple iPhone XS Max is not the only phone with a notch this time as it is also present on the Google Pixel 3 XL. Samsung has decided to stick with a regular display panel without a notch for the Galaxy Note 9.

Dual cameras are all the rage right now and nearly every smartphone manufacturer is trying to bank on it to make their offerings more appealing. Breaking away this norm, Google has equipped the Pixel 3 XL with a single 12 MP sensor on the rear that features a f/1.8 aperture. The Pixel 2 phones were capable of capturing impressive details while shooting photos and we expect their successor to improve upon the already impressive camera. On the front, the Pixel 3 XL features an 8MP + 8MP dual camera configuration inside the notch with a f/1.8 and f/2.2 aperture lens respectively. While one of the sensors sits in a 28mm wide lens that supports PDAF, the other one gets a 19mm ultrawide lens. The two cameras were Google’s primary reason for introducing the notch.

Apple uses a dual-rear camera setup on its iPhone XS Max. It features 12MP + 12MP sensors on the rear with f/1.8 and f/2.4 aperture lens. One can also capture a portrait image and later adjust its depth of field, which is not necessarily a new feature but a welcomed one nonetheless. One will find a 7MP sensor on the front in that notch. Coming to the Galaxy Note 9, it gets the same variable aperture lens configuration as the Galaxy S9. The rear camera comprises of two 12 MP sensors, out of which the primary one’s aperture lens can be varied between f/1.5 and f/2.4. On the front is an 8MP sensor with a f/1.7 aperture lens.

The Samsung Galaxy Note 9 packs the largest battery at a 4000 mAh capacity. Meanwhile, the Google Pixel 3 XL is backed by a 3430mAh battery and the iPhone XS Max features a 3174mAh battery. While there’s no data currently on how the Pixel 3 XL fares in terms of usage, in our reviews, the Galaxy Note 9  (review) managed  an impressive 11 hours and 33 minutes on the PCMark 8 battery test and in standard daily usage, it was able to easily last for a day and a half.

While reviewing the iPhone XS Max, we used Geekbench 4’s battery test to find that it only lasts for 5 hours and 52 minutes. In comparison, after running the test for the same amount of time, Samsung Galaxy Note 9’s battery still had 38 percent battery left. However, in real life usage, the iPhone XS Max easily lasted until the next day since it was fully charged. Only the Galaxy Note 9 supports expandable storage and there’s also the Bluetooth enabled stylus as well. All the three phones are IP68 water and dust proof and come with wireless charging support as well.