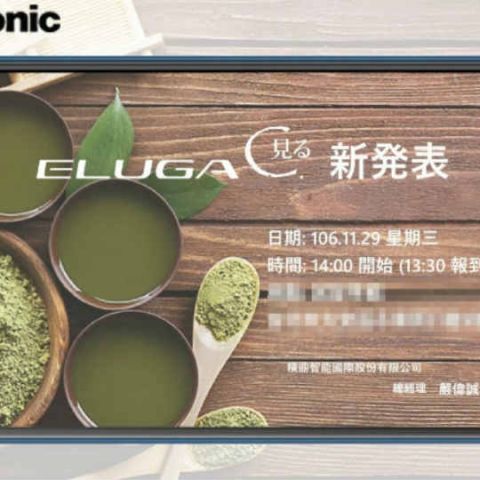 The Panasonic Eluga C is tipped to sport a three-sided edge-to-edge display and its teaser image reveals it features a front-facing camera with a physical home button on its bottom bezel.

Panasonic could launch its first smartphone with a bezel-less display, the Panasonic Eluga C in Taiwan on November 29. According to a report by PhoneRadar, via eprice, Panasonic has confirmed the smartphone’s launch and said that it will sport a three-sided edge-to-edge display, similar to the Sharp Aquos smartphones, but it's not confirmed if it will feature an 18:9 aspect ratio.

The launch date of the smartphone was revealed by the teaser image and the earpiece is spotted above the display. It sports a home button, possibly with an integrated fingerprint sensor, and a front-facing camera with sensors beside it on the bottom bezel. The Eluga C is expected to run on Android 7.0 Nougat out of the box.

Panasonic recently launched the Eluga A4 in India. It is powered by a 1.25GHz quad-core MediaTek processor and comes with 3GB of RAM. It features 32GB of onboard storage, which can be further expanded up to 128GB using a microSD card. The smartphone sports a 5.2-inch HD 720p display and runs on Android 7.0 Nougat.

The Eluga A4 comes with a 13MP rear camera with LED flash and sports a 5MP front-facing camera for selfies. It packs a 5000mAh battery. In terms of connectivity, it features GPS, VoLTE, Wi-Fi, Bluetooth 4.2, and USB OTG. The Eluga A4 comes with the company's personal digital assistant ARBO and the smartphone is launched as an offline only model.