The Oppo Realme 1 will be a “Made in India” smartphone and will be launched in variants covering the price range between Rs 10,000 and Rs 20,000.

Smartphone manufacturers are looking for new ways to grab consumer attention and this is apparent from the plethora of sub-brands and new private labels companies are creating to grab a bigger chunk of the smartphone market. Huawei has Honor, Flipkart has its private label Billion and has also recently announced a strategic partnership with Asus. Amazon also launches phones under the 10.or brand and the e-commerce platform has now partnered with Oppo. Amazon and Oppo will together unveil the “Realme 1” smartphone on May 15, which is touted to be a departure from the boring design and specs currently offered by smartphones. The online retailer has put up a webpage for the device and it is seen featuring the Diamond Black rear panel, which was previously seen on the Oppo F7 Diamond Black edition.

Neither the pricing nor the specifications of the upcoming Oppo Realme 1 have been revealed, but the company says that it will offer the “beautifully designed and power packed choices in the range of INR 10,000-20,000 on India’s largest marketplace, Amazon India.” From the Amazon’s microsite, it is clear that the Realme 1 will be aimed at customers who want an eye-catching smartphone. It features slightly rounded edges and its rear panel resembles a faceted design, which has been compared in the Amazon ad with a very simple looking rear panel of an unknown smartphone. The Realme 1 is being ‘Made in India” and also shares OPPO’s production line in the country. 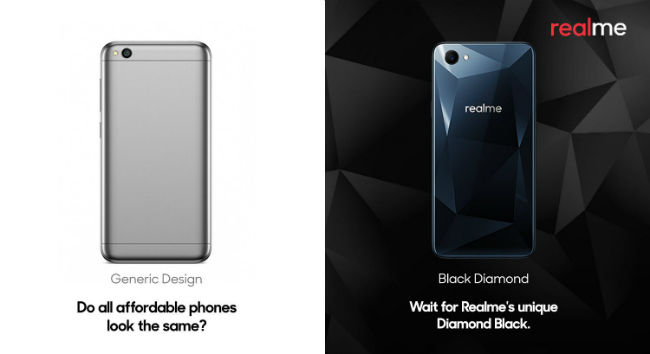 On Amazon, the Realme 1 is seen featuring a single rear camera with an LED flash. There is also an image of a smartphone undergoing the company’s quality tests, we can’t say for sure if it is the realme 1. But if it is, then the device could feature a front-facing home button, which could also double as a fingerprint sensor. The device is also said to have undergone rigorous testing for ensuring its quality and the after sales service and support will be handled by Oppo. The smartphone manufacturer claims to have more than 500 authorised service centres across the country. “Powered by OPPO’s global R&D centres and AI patents, the Realme 1 is built to give you performance like never before,” reads the Amazon microsite, suggesting that the upcoming smartphone could also come with some AI-based features.

Speaking on the launch of the brand, Madhav Seth, Chief Executive Officer of Realme India said, “Today, young consumers prefer a better phone design that represents their different but real personalities. They are looking for an affordable price option without compromising on the built-quality and the device performance. On the functional side, their ask is a smarter camera and selfie experience. Realme phones will satisfy the needs of the young and online consumers through its exquisite design, leading specs, cutting-edge technology and industry-leading quality. We believe we will be the real disruptor in online smartphone market!”

There is speculation that the recently launched Oppo A3 in China could be rebranded as the Realme 1 in India. This could be the case as the Oppo A3 is priced at CNY 2,099 (Rs 22,100 approx) in China and the company could launch a less powerful variant of the device in India. The Oppo A3 features a 6.2-inch full HD+ LTPS display and is powered by the MediaTek Helio P60 SoC with 4GB RAM and 128 GB internal storage. There is also a notch on top of the display. The device is equipped with a 16MP rear camera with a f/1.8 aperture and dual-LED flash. On the front, it features an 8MP sensor with a f/2.2 aperture.

The Realme 1 could go up against the likes of the Xiaomi Redmi Note 5 Pro and the recently announced Asus Zenfone Max Pro M1. Xiaomi recently announced a price hike for two of its devices. The 4GB RAM/ 64GB storage variant of the Redmi Note 5 Pro now sells for Rs 1,000 more, at Rs 14,999, whereas the Xiaomi Mi LED Smart TV 4 has received a Rs 5,000 price bump and now costs Rs 44,999. The company cites the rise in import duty for PCBAs and rupee depreciation as the reason behind the price hike. You can read more about it here.