Oppo K1 with Snapdragon 660, in-display fingerprint sensor launched in India: Price, launch offers and all you need to know 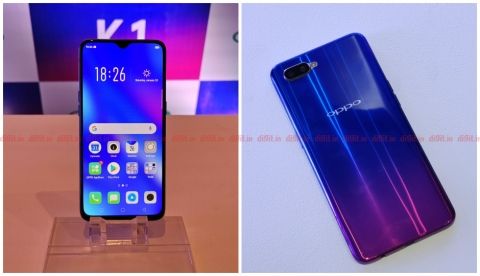 Oppo has launched its first K series handset in India, the Oppo K1. As the device was already launched in China, we know the specifications it comes with. The company today revealed that it will be available in India from February 12 via Flipkart and it is said to be the first phone under the Rs 20,000 range to feature an in-display fingerprint sensor. Highlights of the device include a 25MP front-facing camera that comes with AI-enabled features like Beauty mode and the display, which sports a waterdrop notch design.

The Oppo K1 comes equipped with a 6.4-inch Full HD+ 19.5:9 AMOLED display and is said to have a 91 percent screen-to-body ratio. The screen is protected with Corning Gorilla Glass 5 and has a fingerprint sensor embedded below. The handset runs on the octa-core Qualcomm Snapdragon 660 processor that can reach clock speeds of up to 2.2GHz. While the phone comes in 4GB and 6GB RAM variants in China, the company has launched only the 4GB RAM/64GB storage version in India. The phone's storage can be further expanded up to 256GB via a microSD card.

In terms of optics, the Oppo K1 is equipped with a 16MP primary sensor and a 2MP secondary sensor on the back, assisted by an LED flash. The primary camera on the back is equipped with a Sony IMX 398 sensor. On the front, it comes with a 25MP selfie camera. The phone is backed by a 3600mAh battery and runs on the company's Color OS 5.2 skin, which runs on top of Android 8.1 Oreo.

The Oppo K1 comes with 4GB RAM + 64GB of storage in India and is priced at Rs 16,990. It will be available via Flipkart at 12 PM from February 12. It comes in Piano Black and Astral Blue colour variants.

For launch offers, the company will be offering a 3 and 6 month no-cost EMIon the device. On the launch day, one can also avail 10 percent discount by using Citi bank credit or debit card to pay for the phone. There will also be the Flipkart's Complete Mobile Protection offer with the phone, along with a buyback guarantee at Rs 1. As per Flipkart, one can get up to 90 percent buyback of the device's value when they upgrade to another Oppo device within eight months.

Oppo Find Z spotted on European IP filings, could be company's next 5G flagship with Snapdragon 855