Oppo F7 will have a notch on its display 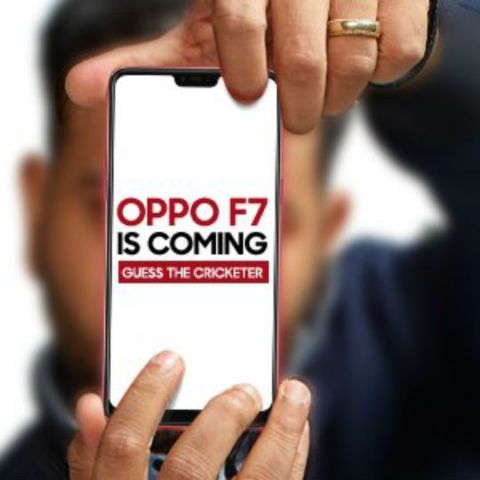 The phone looks similar to the rumored Oppo R15, and is likely to retain the “selfie expert” tagline.

Oppo is all set to launch the next version of its F-series smartphone in the form of the Oppo F7. The company recently tweeted the image of the upcoming phone with Indian cricketer Hardik Pandya. The phone shown in the image looks a lot like the rumored Oppo R15, which is expected to launch in China in the coming days. The most interesting bit is that the display will have a notch, just like the Apple iPhone X. However, the phone does feature a distinguishable chin at the bottom. Oppo didn't share any other information, besides teasing that the phone might be launched soon as the tweet says “Make way for the all-new #OPPOF7 now with an awesome notch screen."

The company didn't share any other details about the upcoming device, but speculations and rumors have been around for a while. Gizmochina reports that the Oppo F7 might feature a 6.2-inch Full HD+ display with a 19:9 aspect ratio display and might have a screen to body ratio of 89.09 percent. There have been rumors suggesting that the similar looking Oppo R15 might be powered by a Qualcomm Snapdragon 670 SoC, and this phone may feature the same SoC. That said, a separate rumor predicts that the device might feature the newly announced MediaTek P60 chipset.

Other features include a 25MP selfie camera, which will retain the AI features, better real-time HDR and beauty mode. Most probably, the phone will also retain the “Selfie Expert” tagline. The phone might even feature animated AR stickers, similar to what the Samsung Galaxy S9 and Asus Zenfone 5 offer. At the rear, the phone may feature a dual camera setup. The phone is likely to offer 6GB RAM and 128GB storage. It is also expected that the device might run on Color OS 4.0, which is based on Android 8.1 Oreo.

While there are no official dates yet, one of the Twitter comments suggests that the phone will be launched on March 26, 2018. The company is also running a contest today where one is required to retweet all the tweets posted today in order to be eligible to win a prize (probably a phone).

Make way for the all-new #OPPOF7 now with an awesome notch screen. Can you guess who the Indian cricketer is behind the phone? pic.twitter.com/dc2vaHlm2m