Almost all major smartphone brands resort to celebrity endorsement, and OnePlus is no different. After signing on Robert Downey Jr as its brand ambassador around the launch of the OnePlus 7 Pro to lead the marketing push for the company’s new flagship. However, there seems to be just one slight problem. Iron Man, it seems, had forwarded a Weibo post from OnePlus using a Huawei P30 Pro.

OnePlus did receive a lot of flack for spending money on celebrity endorsement rather than getting an IP rating, but this incident is something else. The Weibo post was promptly taken down, but not before screenshots of it started circulating the web. This is hardly the first time a celebrity has been caught using a phone that is not from the company they endorse. Recently, Russian TV presenter Ksenia Sobchak was caught using a competitor’s phone on live television, which landed her in trouble with Samsung, seeing as how she is the company’s brand ambassador in Russia. Often times in the past, celebrities endorsing one Android phone or the other have ended up tweeting from an iPhone. So this incident with Robert Downey Jr hardly qualifies as a major blunder. 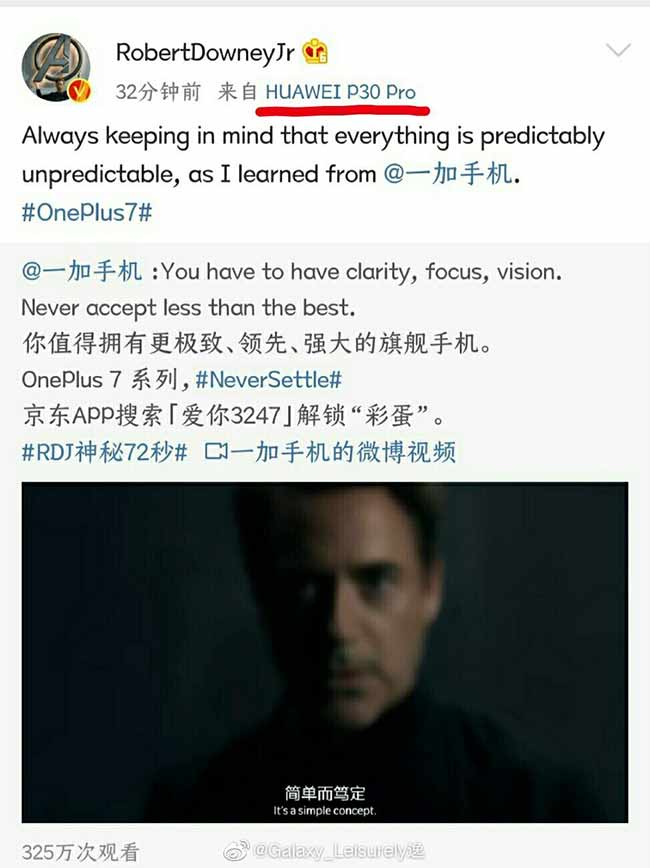 What is interesting, however, is the choice of smartphone. Apple’s iPhone seems to be the preferred choice of phone for Hollywood, but Robert Downey Jr using a Huawei device is…different. Besides the fact that Huawei has been having its fare share of trouble in the U.S. the company didn’t actually sell the phone officially in the U.S. While the phone’s UI is something of debate, what we know for sure is that it has the best camera on a smartphone as of now. Huawei achieves this with a completely new design for the main sensor, using RYYB pixels instead of RGB. The camera also sports a 5x optical zoom lens and an ultra wide lens, with Leica having manufactured all the optics. You can read our review of the Huawei P30 here and the review of the OnePlus 7 Pro here.