OnePlus 9 could have a curved display after all

A real-life image allegedly of the upcoming OnePlus 9 has leaked online giving us a look at the design of the phone along with other key details. OnePlus 9 and OnePlus 9 Pro are rumoured to launch sometime by mid-March and there are speculations that they could be joined by the OnePlus 9 Lite.

The new leak was reported by ITHome with a live image of the OnePlus 9 showing off the phone from the back and the front. The image also reveals some key details about the phone from the Settings menu. From the images, we can see that the OnePlus 9 is shown to be clad in a glossy silver finish with a large camera module in the top-left corner. The image seems to have been posted by TechDroider in a video on YouTube. 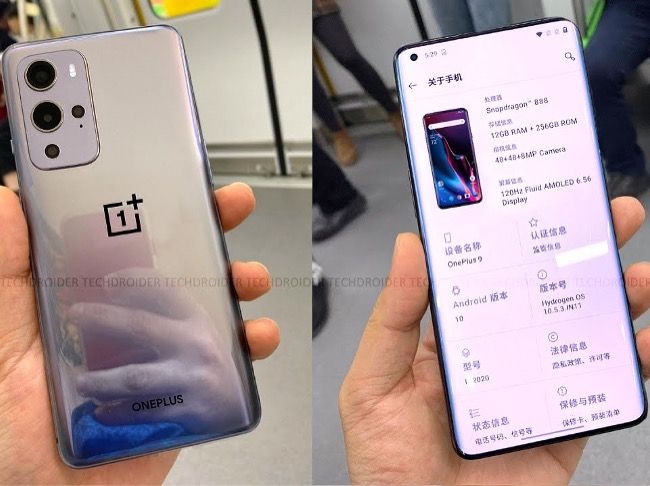 As per the leaked image, the OnePlus 9 is powered by the Snapdragon 888 processor paired with 12GB RAM and 256GB storage. The phone is equipped with a 48MP primary camera, 48MP ultra-wide-angle camera and an 8MP camera as well. This particular bit is where the information deviates from previous leaks that hinted at the presence of a 50MP primary camera on the upcoming OnePlus 9 series.

Other than that, the OnePlus 9 is shown to be equipped with a 6.56-inch Full HD+ display with support for 120Hz refresh rate. Interestingly, previous leaks have indicated that the standard OnePlus 9 will have a flat display but that does not seem to be the case with the leaked image. The image purportedly of the OnePlus 9 has a screen that curves along the edges, similar to the OnePlus 8, though the punch-hole cutout for the selfie camera does seem to shrink in size for the upcoming OnePlus 9 series. The OnePlus 9 and OnePlus 9 Pro are also likely to support 65W fast charging out-of-the-box that debuted with the OnePlus 8T in October.

We will advise our readers to take the new leak with a pinch of salt as we don’t have any official information about the devices yet. OnePlus CEO Pete Lau has previously indicated that the design of the OnePlus 9 lineup isn’t final yet.

OnePlus 9 series is rumoured to launch sometime by mid-March where the company could also unveil its first smartwatch alongside. The company is yet to share its plans for the launch of the OnePlus 9 series.