The OnePlus 7 could come bearing an in-display fingerprint sensor on its 6.5-inch display. The highlight here is that this is the first time OnePlus is using the pop-up camera design. 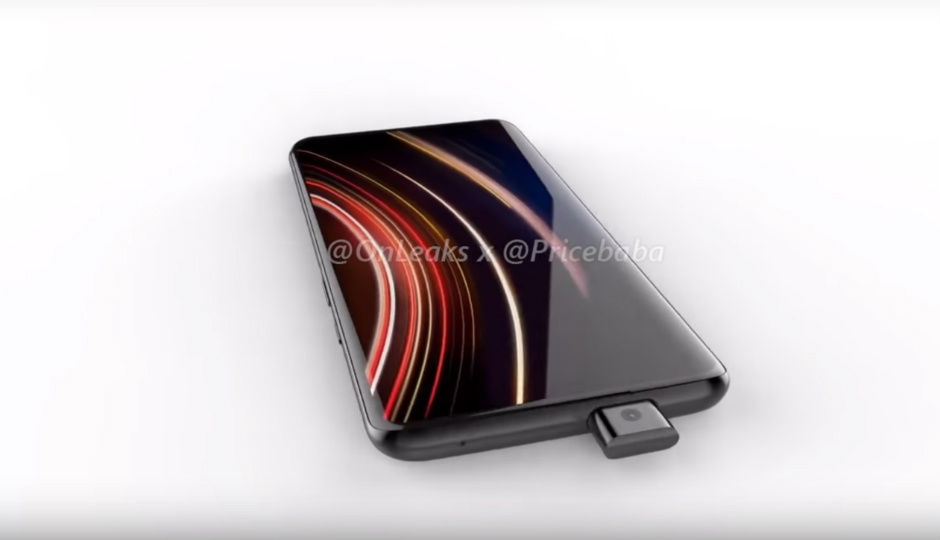 The OnePlus 7 is slated to launch sometime in Q2 2019, which is basically on the lines of OnePlus’ six-monthly refresh cycle for its flagship smartphones. If what we heard along the sidelines of MWC 2019, the OnePlus 7 could launch alongside a 5G OnePlus device, which the company has promised several times over since December last year. In fact, OnePlus also had a prototype of its 5G smartphone present on the MWC showfloor this year, showcasing low-latency cloud gaming on a functioning 5G network provided over Ericsson’s network technology.

Now, in a full fledged render leak, the OnePlus 7 has been detailed to the tee, at least in terms of its design. The next “flagship killer” from OnePlus, the OnePlus 7 has been outed by popular tipster OnLeaks in collaboration with PriceBaba. OnLeaks is known for his accurate smartphone leaks and in this one of the OnePlus 7, the tipster has confirmed what was rumoured for a while now - pop-up selfie camera. Yes, OnePlus seems to have borrowed from its sister brands Oppo and Vivo to create its first smartphone with the pop-up selfie design in the form of the OnePlus 7.

The leaked images and video of the alleged OnePlus 7 show that the smartphone comes bearing a 6.5-inch display which curves towards the edges. We expect this to be an Optic AMOLED display that also appeared on the OnePlus 6T. There is no notch or pin-hole on the screen, instead the a motorised front-facing camera pops out from an enclosure on top of the display. At the back, three cameras are aligned vertically on the top-middle portion of the phone, with an LED flash resting underneath them. There are no details available on the camera specs of the smartphone.

The volume buttons can be spotted on the left edge of the OnePlus 7, while a power button and alert slider are placed on the right edge. The leaked information suggests that there could be an in-display fingerprint scanner on the OnePlus 7, just like the OnePlus 6T. Further, there is no sign of a headphone jack on the leaked OnePlus 7 and it is seen with a standard USB Type-C port. Then again, we weren’t really expecting OnePlus to have a change of heart on that one. Just besides the Type-C port, the OnePlus 7 houses the speaker grille and microphone.

So... To celebrate my fourth Twitter Anniversary as @OnLeaks and start 2019 leaks season, here comes a lil gift as your very first look at the #OnePlus7! 360° video + gorgeous 5K renders + dimensions, on behalf of my Friends over @Pricebaba -> https://t.co/gj5eHbiB25 pic.twitter.com/7oNyF9jgG0

This is the second time the OnePlus 7 has leaked in the past two days. The previous OnePlus 7 leak was compiled by Chinese tipster @Steven_Sbw who revealed the phone’s front panel. The leaked image showed the display of the OnePlus 7 without a notch or a punch hole camera. This is when it was first hinted that the phone could have a pop-up camera similar to the Vivo Nex and the Oppo Find X, given that all three smartphone makers - Oppo, Vivo and OnePlus are under the same mothership - BBK Electronics.