The OnePlus 6 is nearing launch and new leaks about the upcoming flagship smartphone have started appearing all over the internet. We had earlier heard that the OnePlus 6 will come bearing the now popular ‘notch’ atop the display with a 19:9 aspect ratio. However, a new spec sheet leak now tells us that the phone will retain the 18:9 display aspect ratio. The spec sheet further suggests that the OnePlus 6 will feature a 6.28-inch Full HD AMOLED display with a screen resolution of 2280 x 1080 pixels.

If the spec sheet does indeed belong to the OnePlus 6, one can also expect the mobile device to feature the latest Qualcomm Snapdragon 845 processor clocked at 2.7 GHz, with 6GB RAM and 128GB storage. The battery capacity is set at 3450 mAh, packed in a 175 gm body.

As far as the camera goes, the OnePlus 6 seems to share the same primary camera specs as the current flagship OnePlus 5T. The leak mentions a 16MP+20MP rear camera setup with f/1.7 aperture on both lenses. A 20MP lens with f/2.0 aperture can be expected on the front of the device. 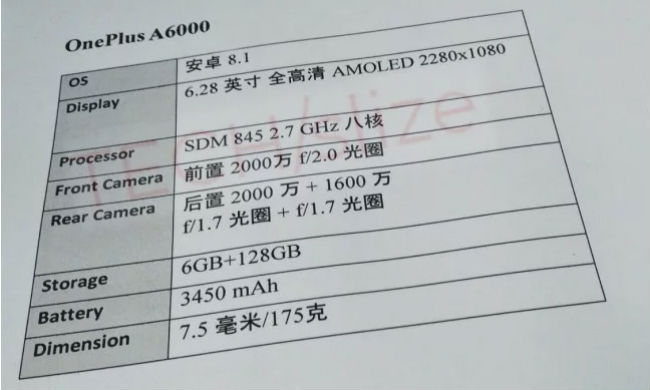 The overall design of the OnePlus 6 is expected to mirror that of the recently launched Oppo R15 since the latter is OnePlus’ parent company and we have seen similar design philosophies in the past.

In the software department, the OnePlus 6 will most likely feature Android Oreo 8.1 out of the box with the company’s own Oxygen OS interface layered on top. It is also rumoured that the OnePlus 6 will be the most expensive OnePlus device ever, but we feel a major pricing change will not be a “flagship killer” move for the company.