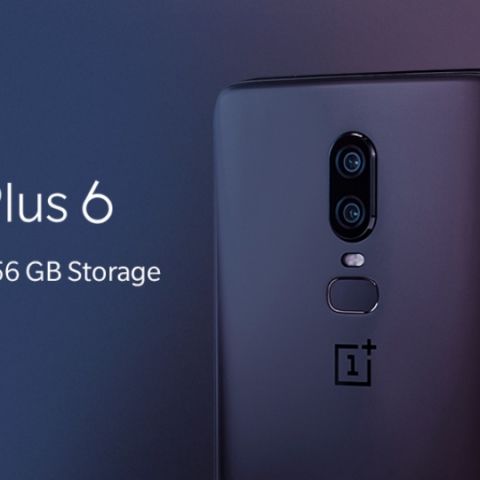 OnePlus has also announced a few offers for those planning to purchase the device. Customers can avail an instant discount of Rs 2,000 on EMI transactions on HDFC debit and credit cards on Amazon.in for OnePlus 6 Red and other OnePlus 6 variants. The customers who buy OnePlus 6 devices on other platforms, including oneplus.in and OnePlus exclusive offline channels will be eligible for Rs 2,000 cashback on all HDFC Credit card on EMI transactions. They are also eligible for no cost EMI on all popular bank credit cards on Amazon.in.

The Chinese company said that the back of the OnePlus 6 Midnight Black, while glass, features a matte-black finish. To achieve the matte black finish, OnePlus says that it used corrosion on the surface of the glass to carefully create countless tiny holes, allowing the layer beneath it to permeate through the glass. A 0.1mm-layer of film with a jagged texture was designed to produce a subtle S-shaped line when the phone is reflected in the light.

Meanwhile, to capture the red in the Red Edition, OnePlus says it utilised an optical coating, evaporative film and six panels of glass. An added anti-reflective layer was used to allow more light to reach the bottom layers of glass before being reflected off the device, creating a sense of depth. A translucent orange layer intermixes with the red base layer to achieve a radiant glossy red, which the company says is unique to OnePlus.

Now as far as specifications are concerned, the OnePlus 6 is powered by a Qualcomm Snapdragon 845 SoC and runs OxygenOS, which is based on Android Oreo 8.1. It features a 6.28-inch FHD+ Full Optic AMOLED display with a 19:9 aspect ratio, and a notch on top of the display. It has a rear panel made of glass and a vertically placed dual-rear camera setup. There is a 16MP + 20MP sensor on the main camera, while on the front it has a 16MP shooter. The smartphone comes in a 6GB/64GB model and an 8GB RAM version with 128GB and 256GB internal storage options.Click here to buy.