The new renders show the OnePlus 6 with an edge-to-edge bezel-less display and it could feature a centrally placed dual rear camera setup which is vertically stacked, with a rectangular fingerprint scanner on the rear. 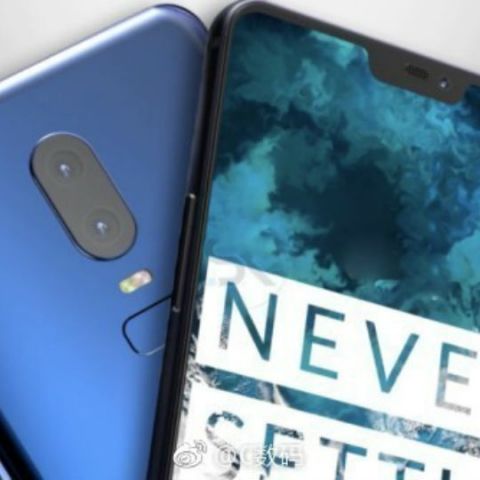 OnePlus 6 has been the talk of the town ever since the company’s Co-Founder revealed that it will sport an iPhone X-like notch on top of its display. Now, a new report from CNMO claims that the smartphone will launch in three colour models, Black, White and Blue, and some renders of the phone in the new colour model was also posted on Weibo. OnePlus' previous phones come in Black and White colour variants.

The leaked images hint at a red coloured Alert Slider on the OnePlus 6, same as the one we have seen on the OnePlus 5T Star Wars edition. The company recently Tweeted a new teaser video which suggests that the Alert Slider on the OnePlus 6 could be used for manual focusing. Coming back to the renders, they are in line with previous rumours and it is seen featuring a vertically-aligned dual camera setup with a fingerprint sensor, which is rectangular in size. The smartphone features an edge-to-edge display with the notch on top and its presence on the upcoming smartphone has been confirmed by the company officials. This has caused a number of fans to voice their opinion against the decision and Pete Lau, along with Carl Pei, have given lengthy explanations as to why the company has opted to go for the notch design. The officials say this has been done for providing more usable screen real estate to uses. However, users who are against the notch will also have an option for hiding it by using the compatibility mode.

Some other specs of the OnePlus 6 have also been confirmed by the company. It will be powered by the Qualcomm Snapdragon 845 SoC with 8GB RAM and 256GB of onboard storage, which will be a first for the brand. The smartphone will also come with a 3.5mm audio jack and as mentioned above, it will come with a compatibility mode for hiding the notch when the device is in landscape orientation. It can be set individually for an app and the company says to have tested over 1000 top apps on the Play Store. The device will also support gesture-based navigation and an official teaser by the company hints that one might be able to launch apps by drawing a gesture on the screen.

The company is also rumoured to launch a Bluetooth enabled version of its Bullets in-ear headphones alongside the OnePlus 6. The ‘OnePlus Bullets Wireless’ headphone has been spotted on the Bluetooth certification website with the model number BT31B and it’s registered to OnePlus. There could also be a special variant of the device with a wooden finish on the rear panel. The phone is expected to launch running on OxygenOS based upon Android Oreo and official forum for the OnePlus 6 is also live.