The leaked renders of the OnePlus 6 show off the notch on the display as well as the “Designed by OnePlus” writing at the bottom of the rear panel. 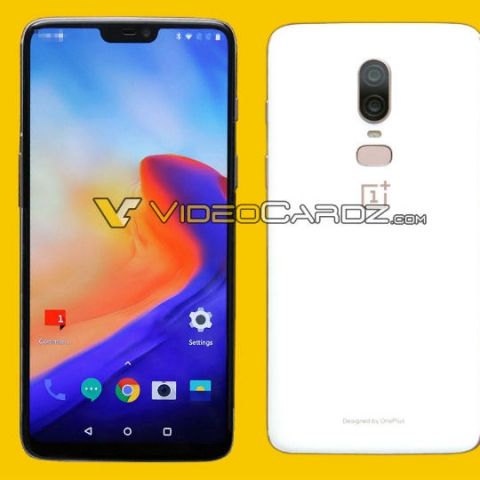 As the launch date of the OnePlus 6 gets nearer, the leaks and teasers just keep on coming. Videocardz.com has posted renders that show the front and rear of the upcoming device. The report notes that the device would be available in three colour variants, White, Glossy Black and Smoked Glass. The readers of the OnePlus 6 also include the notch and a glass back, two aspects of the phone that have already been confirmed by OnePlus themselves. The report also notes that the images have been “slightly retouched” in order to ensure the safety of the website’s source.

The front of the renders suggests a near bezel-less design, which would make sense considering most current-gen smartphones offer the same. It also shows on-screen navigation buttons, which goes against an earlier leak that suggested that the company might offer gesture based controls, similar to what the Apple iPhone X offers. The render of the rear of the OnePlus 6 is in line with previous leaks. This includes the vertically stacked dual-rear cameras with the fingerprint sensor placed below the camera module. “Designed by OnePlus” is written on the bottom of the rear panel. This was also revealed in a teaser by OnePlus.

Yesterday, OnePlus confirmed that it plans to unveil the OnePlus 6 globally on May 16. The smartphone would be unveiled in India a day later. The Indian launch event is set to be held in Mumbai and those interested in attending can click here to know how they can do so. The phone will be exclusive to Amazon India, and Prime members will get an exclusive sale that starts at 12:00PM IST on May 21, 2018.

OnePlus has also confirmed that the OnePlus 6 will get a Marvel Avengers themed limited edition version. Like the Star Wars edition of the OnePlus 5T, the new phone would feature design elements inspired by the movie, Avengers: Infinity War. The phone will launch alongside the standard version of the OnePlus 6 on May 17.