It was widely reported that Nokia X6, which was earlier launched in China, will unveil in the global market bearing Nokia 6.1 Plus moniker. It was also said that Taiwan will be the first country to get the Nokia 6.1 Plus, however, HMD Global decided to unveil the phone in Hong Kong first and from there it’ll go to Taiwan. One of the most interesting things in that the global variant is that the phone will be under Google’s Android One programme.

Nokia’s official Taiwanese Facebook page posted a photo and a message teasing that the next launch of the phone is in Taiwan. The device has already got necessary certifications in Russia, so it is very likely that the phone will also come to Moscow. As far as India is concerned, recently, a report claimed that the smartphone may land on Indian shores in August or September. We’ll just have to wait a little longer to get the confirmation from the company. 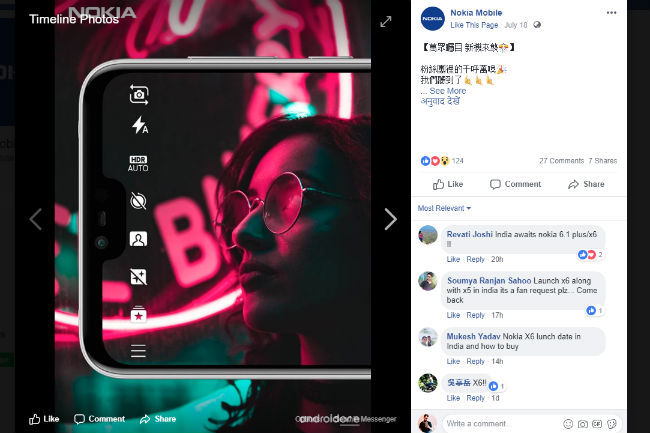 Nokia X6 Specs: The Nokia X6 (6.1 Plus) sports a 5.8-inch Full HD+ display with notch and 19:9 aspect ratio. The display is protected by Gorilla Glass 3, and has thin bezels and a chin. There is Nokia-branding on the chin. In the camera department, the phone has a dual-camera system with 16MP and 5MP lenses by Zeiss optics on the back. The front shooter has a 16MP sensor and both the cameras have f/2.0 aperture. Under the hood, there is an Octa-core Qualcomm Snapdragon 636 chipset and there is a 3,060mAh battery with fast charging support to power the smartphone. As we have already mentioned above, the phone has 4GB RAM and 64GB of storage and it runs on Android Oreo 8.1.