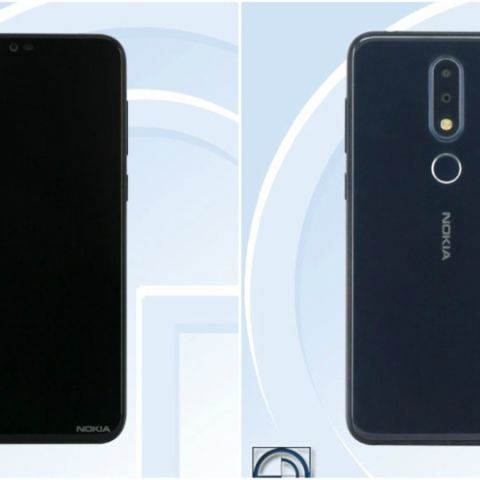 The Nokia X features a notch on top of the display and the TENAA listing suggests that it features a 5.8-inch full HD+ TFT display.

HMD Global will launch the Nokia X on May 16 and ahead of the launch, the smartphone has appeared on TENAA, the Chinese certification website. The company previously sent out invites for the event and has already showcased the device by posting an image of it via its Weibo channel. There has been no official confirmation of the specifications of the device but the TENAA listing reveals some of the device’s hardware configuration, possible colour models it could launch in, and more. As per the listing, the smartphone features the model number Nokia TA-1099 and could be launched in Blue, Black, and Silver White colour variants. It will reportedly be priced starting at CNY 1,600 (Rs 16,900 approx).

The TENAA listing suggests that the Nokia X will feature a 5.8-inch full HD+ TFT display with a taller 19:9 aspect ratio and a resolution of 1080x2280 pixels. The device features an iPhone X-like notch on the top of its display. It is said to be powered by an unnamed octa-core processor, which is clocked at 1.8GHz and could come with 3GB, 4GB, and 6GB RAM with options of 32GB, 64GB and 128GB of internal storage variants. It will most likely be launched running on the latest stock Android 8.1 Oreo out-of-the-box.

On the rear, the Nokia X could sport a 16MP dual-rear camera setup. It was previously reported that the smartphone might sport Zeiss lenses on the rear but no information reiterating this was spotted on the TENAA website and the Zeiss branding is also missing. There is currently no info about the front facing camera setup but the listing suggests that it will come with connectivity options like  4G VoLTE, Bluetooth, and USB support.

Along with the Nokia X (or X6), it’s rumoured that the company could also launch some revamped Nokia N Series smartphones. Nokia recently posted an image of the Nokia N8 via its Weibo account commemorating the launch of its first-ever Nokia N Series smartphone, which was released 13 years ago on April 27, 2005. HMD Global has been banking on the nostalgia factor for some time now as it reintroduced the Nokia 3310 with revamped configuration and more recently, the Nokia 8110 4G.