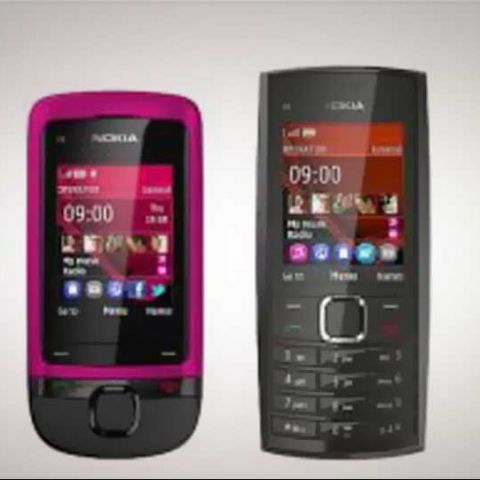 Nokia has announced two new feature phones, Nokia C2-05 and X2-05, scheduled to launch globally by the end of Q4 2011. According to Nokia, the two phones provide both “looks and power, for less.” The devices are apparently perfect for the younger generation, who often treat their phones as electronic jewellery, and yet want smartphone features like internet and apps, all at an affordable price.

To that end, Nokia has given both the Nokia C2-05 and X2-05 its latest Nokia Browser, which uses compression technology to render web pages faster, at a fraction of the bandwidth. Apart from GPRS/EDGE connectivity, the two phones also come with the Nokia Store pre-installed, for access to the thousands of apps available there, as well as content.

Social-networking apps are also pre-installed, such as Facebook and Twitter, and for those C2-05 and X2-05 phones shipping to China, an app for the popular QQ social-network will be present.

The Nokia C2-05 is a vertical slider device, with a 2-inch QVGA (320x240 pixel) LCD 65K colour display. It comes with a VGA camera, FM radio with recorder, a media player, microSD storage expandability up to 32GB, Bluetooth and microUSB connectivity, and a manufacturer rated battery life of 4 hours of talktime, and 20 days of standby time. The C2-05 measures in at 99.43x47.77x16.28 mm, and weighs 98.5 grams. There’s also a stereo headset included in the box, and, the C2-05 will come in a range of colours, such as pink, peacock blue and dynamic grey. The Nokia C2-05 has been given a suggested price of around 50 Euros (roughly Rs. 3,400), excluding taxes and subsidies.

The Nokia X2-05 is an entertainment phone, which has its media player as its central focus, and comes with a stereo headset and an extra loud loudspeaker at 106 phons. Just like the X2-05, it comes with the new Nokia Browser and Nokia Store pre-installed, as well as Facebook and Twitter clients. Other features of the phone include a 2.2-inch display QVGA LCD 65K colour display, FM radio with recording, a VGA camera, Bluetooth and microUSB connectivity, microSD storage expandability up to 32GB, and a manufacturer rated battery life of 4 hours of talktime, and 25 days of standby time. The Nokia X2-05 weighs in at 87.8 grams, and measures 113x50x15mm. Nokia has priced the device at 46 Euros (roughly Rs. 3,100) before any local taxes or operator subsidies.