Nokia 9 is expected to be a premium version of Nokia 8 with features like facial recognition and water resistance. The smartphone has been spotted running Android 8.0 and is expected to debut later this year.

HMD Global, the new home of the Nokia brand, has already launched four smartphones - Nokia 3, Nokia 5, Nokia 6 and flagship Nokia 8. The Finnish company is expected to introduce two new smartphones before the end of this year and one of them could be the premium flagship called Nokia 9. The smartphone has appeared on Antutu and Geekbench benchmarking in the past and has now silently made its way to GFXBench as well.

While the previous benchmark leaks hinted at the smartphone running Android 7.1.1 Nougat, the new GFXBench listing shows the Nokia 9 running Android 8.0.0 Oreo. This shouldn't come as a surprise considering that HMD has already confirmed an Oreo update for all its existing devices and the operating system has been pushed to Android Open Source Project (AOSP). The listing further notes that it will be powered by Qualcomm's Snapdragon 835 chipset coupled with 4GB RAM and 64GB internal storage. 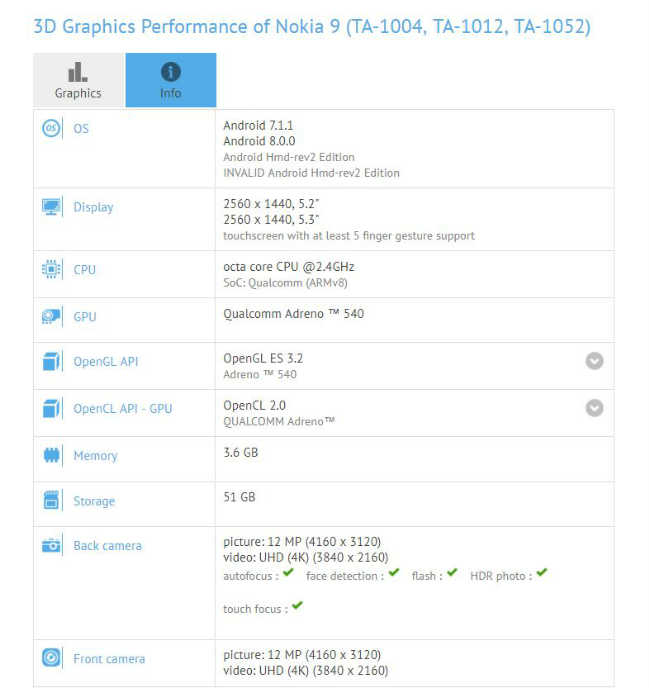 Previous rumours claimed that the Nokia 9 will differ from the Nokia 8 by packing 6GB or 8GB RAM and 128GB internal storage. The handset is said to borrow the display and camera setup from the Nokia 8. It is expected to feature a 5.3-inch Quad HD display, with dual 12MP rear cameras and a 12MP front camera.

It is also expected to add new features like iris recognition and IP68 water and dust resistance. While the Nokia 8 sports a big forehead and chin, the upcoming Nokia 9 might opt for a design with thinner top and bottom bezels like other flagship devices. The device could be priced at around €749 (approximately Rs 60,000).