The Nokia 9, the rumoured flagship smartphone from HMD Global, has been part of multiple leaks in the past. The handset recently appeared in the form of a leaked prototype revealing its dual rear camera setup and Qualcomm Snapdragon 835 processor under the hood. While, the handset was earlier rumoured to feature 4GB RAM, a new GeekBench listing suggests that the device might offer 8GB of RAM instead. The leaked benchmark reveals specifications of an "Unknown Heart" Nokia model with 8GB RAM and mentions an  "ARM implementer 81 architecture 8 variant 10 part 2048 revision 1," which suggests the use of the Snapdragon 835. The handset runs Android 7.1.1 Nougat and has scored 615 on single-core test and 1116 on the multi-core test. 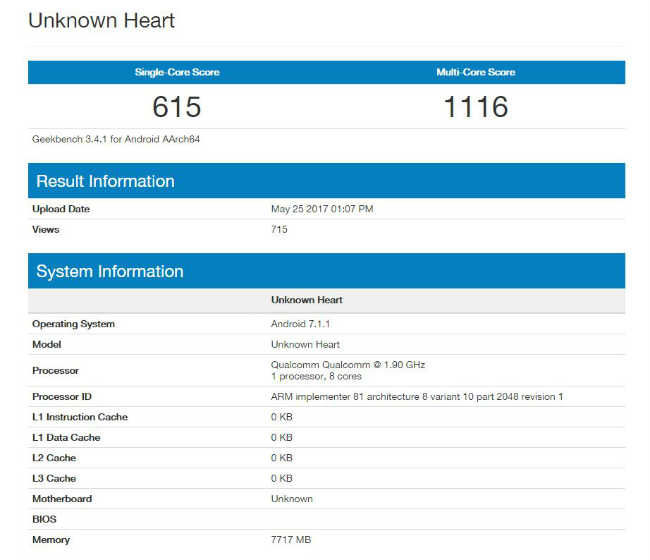 Most Android flagship smartphones available in the market right now like the OnePlus 3, offer up to 6GB RAM. As far as other specifications are concerned, the handset is rumoured to sport a 5.3-inch display with a Quad HD resolution of 2560 x 1440 pixels. The previous leaks suggested it may have 4GB RAM, 64GB storage and dual 13MP rear camera setup. The handset is tipped to hit retail stores carrying a price tag of €750, which is approximately Rs. 54,000.