The new leaked renders reveal a new Black and White colour variants of the Nokia 7 Plus side by side and reaffirm the ongoing rumours that it might come with a thin-bezel design. 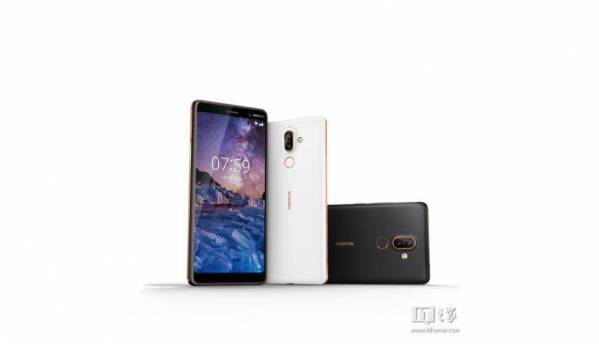 Just ahead of the speculated unveiling at MWC 2018, the alleged Nokia 7 plus has leaked in press renders. The device’s Black and White colour variants have been spotted on on Baidu Tieba, by NokiaPowerUser, and the images reaffirm the ongoing rumours that the smartphone will come with an 18:9 display and sport dual rear cameras.

As per the renders, the Nokia 7 Plus could sport vertically placed dual rear camera setup with Carl Zeiss lenses and come with dual LED flash. The front is also seen with a thin-bezel design and a curved screen. Adding to the aesthetics of the device is a gold lining which wraps around its edges, outlines the camera module and the rear placed fingerprint sensor.

Recently, Even Blass posted a render of a similar looking Nokia 7 Plus, however, it was seen with an Android One branding on the rear. It is rumoured to be the company’s first smartphone under the Android One program and could be launched running on Android Oreo. Previous reports suggest that the smartphone could feature a 6-inch 18:9 display and might be powered by a Qualcomm Snapdragon 660 SoC. It is expected to come with 4GB RAM and 64GB ROM and could be backed by a 3000mAh battery.

In terms of camera, the Nokia 7 Plus is speculated to sport a dual 12MP + 13MP camera setup on the rear and come with a 16MP front-facing camera. As seen in the renders, the device could feature Quick Charge support and a USB Type-C port as well.

Apart from the Nokia 7 Plus, HMD Global could also showcase some other devices like the flagship Nokia 9 and an entry-level Nokia 1 smartphone running on Android Oreo (Go Edition). You can read more about what Nokia and other OEM manufacturers like Asus, Huawei and more could launch at the MWC 2018 here.