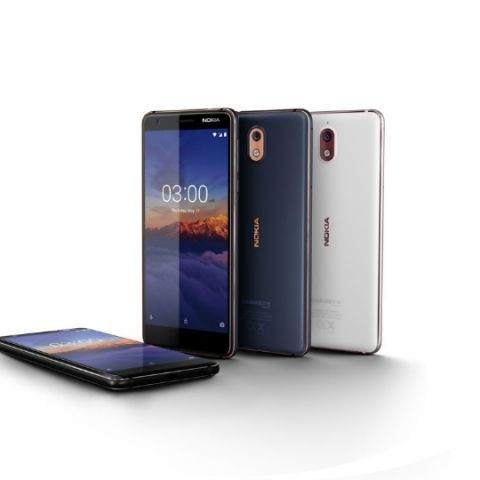 HMD Global has announced that it will be selling the Nokia 3.1 in India starting July 21. Interestingly, the Android One device will be a Paytm Mall exclusive, instead of Flipkart or Amazon, which are popular ecommerce websites of choice for most mobile phone makers. The Nokia 3.1 will also be sold on Nokia.com and will be made available offline across top mobile retailers in the country. The phone will come in three colours: Blue/Copper, Black/Chrome and White/Iron.

As far as Nokia 3.1 specs are concerned, the device features a dual anodised diamond cut design and comes with a 5.2-inch HD+ IPS display with an 18:9 aspect ratio. The display also gets Corning Gorilla Glass protection. For performance, the Nokia 3.1 utilises a MediaTek 6750 Octa-core chipset, where four cores are clocked at 1.5GHz and the rest of the cores are set at lower speeds for saving power. Globally, the Nokia 3.1 also has a 3GB RAM version with 32GB internal storage, but only the 2GB/16GB variant will make it to India.

In the camera department, the Nokia 3.1 comes with a 13MP rear camera with f/2.0 aperture and LED flash. Upfront is an 8MP wide-angle camera. The device is backed by a 2990mAh battery and akin to its predecessor, it misses out on a fingerprint scanner.

Announcing the launch and availability of the phone, Ajey Mehta, Vice President and Country Head – India, HMD Global, said, “India is one of our top markets and Indian consumers, a top priority for us. Every single detail on a Nokia smartphone is designed with consumers in mind, which is why we are delighted to introduce a further refined Nokia 3.1 smartphone that delivers a dramatic step up on performance, continues to drive the most premium design elements and delivers the class-leading quality that you expect from us.”

Since the Nokia 3.1 is enrolled in Google’s Android One Programme, it will receive three years of monthly security patches and two years of OS updates, up until Android Q. Users also get access to free unlimited high-quality photo storage using Google Photos on the device.

HMD Global has set the Nokia 3.1 India Price at Rs 10,499, which is not too different from its global pricing of EUR 139. There are a bunch of offers bundled with the phone. Consumers buying Nokia 3.1 from a retail outlet by scanning the Paytm Mall QR code will get 10% cashback on recharges and bill payments on Paytm. Consumers will additionally get two Rs 250 movie cashback vouchers which can be redeemed against booking minimum two movie tickets via Paytm. Those using ICICI Bank Credit or Debit Card will get a 5% cashback. On a recharge of Rs 149, Idea and Vodafone consumers will get 1GB data/day, unlimited calls and 100 SMS/day for 28 days; additionally, consumers upgrading from 2G or 3G phone to the new Nokia 3.1 will get 1GB data/day for 28 days. On a recharge of INR 595, consumers will get unlimited calls, 100 SMS/day, 18GB data for 6 months.