Nokia 9 will be the premium flagship taking on Samsung Galaxy Note 8 and LG V30 while Nokia 2 will be the entry-level smartphone in HMD Global's lineup and it could be priced under Rs 8,000. 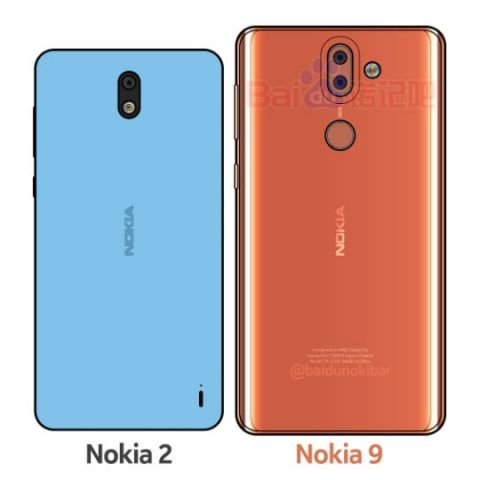 An image spotted by Nokiapoweruser on Baidu shows the rear design of upcoming Nokia 2 alongside the Nokia 9. The Nokia 9 is expected to be the premium flagship device from HMD Global and will feature a 3D glass back, along with support for wireless charging. The leaked image shows dual rear cameras with Zeiss lenses and a rear mounted fingerprint sensor. The dual rear camera setup is expected to offer improved optics in comparison with the one found on the Nokia 8.

The Nokia 9 is expected to sport a design with thinner top and bottom bezels and is expected to feature an OLED display. The smartphone is said to come in 6GB and 8GB RAM variants, along with 128GB internal storage. The flagship device has been detailed to support IP68 water and dust resistance and may include an iris scanner. The Nokia 9 could be priced around €749 (approximately Rs 57,500) when it becomes available later this year.

The Nokia 2, on the other hand, will be the entry-level smartphone in HMD Global's Android smartphone lineup. The handset is expected to sport a 5-inch HD display and use Qualcomm's Snapdragon 212 mobile chipset. The handset will feature 1GB of RAM, 16GB storage and will support dual-SIM connectivity. It is likely to feature an 8MP rear camera and a 5MP front camera.

The entry-level Nokia 2 will also be one of the first devices from the Finnish company to feature an on-screen Android navigation buttons. The official renders of Nokia 2 were shared by Evan Blass and it is tipped to pack a beefy 4000mAh battery. Nokiapoweruser says Nokia 2 could be launched at the end of September or early October at Rs 7,999 in India.