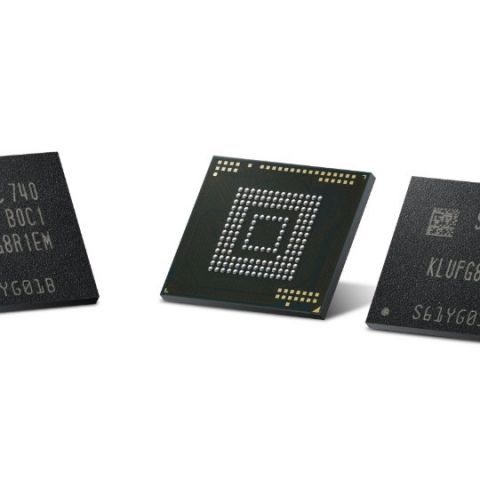 Samsung has just announced that the company has started mass production of 512GB eUFS (embedded Universal Flash Storage). Currently, the max embedded storage available to smartphone devices is 256GB, and only a few smartphones offer that. Samsung’s latest flash solution is twice as dense as its previous 256GB storage options and it occupies the same amount of space as a microSD card. It consists of eight 64-layer 512Gb V-NAND chips and a controller chip. In comparison, the previous 256GB will be based on 48-layer V-NAND. Samsung claims that the read and write speeds of this chip is 860 MB/s and 255MB/s respectively.

“The new Samsung 512GB eUFS provides the best embedded storage solution for next-generation premium smartphones by overcoming potential limitations in system performance that can occur with the use of micro SD cards. By assuring an early, stable supply of this advanced embedded storage, Samsung is taking a big step forward in contributing to timely launches of next-generation mobile devices by mobile manufacturers around the world,”  said Jaesoo Han, Executive Vice President of Memory Sales & Marketing at Samsung Electronics.

Besides that, the company is also shifting gear and increasing the production of its 256GB V-NAND storage to meet the growing demands in the mobile space. That said, we are yet to see a Samsung device to offer 256GB or more onboard storage. Maybe the company will change that with its next gen flagship which is due to launch early next year. The Samsung Galaxy S9 is more than likely to be powered by the Exynos 9810 SoC, which was announced recently.