New Xiaomi smartphone spotted on TENAA, could be the Redmi 6A 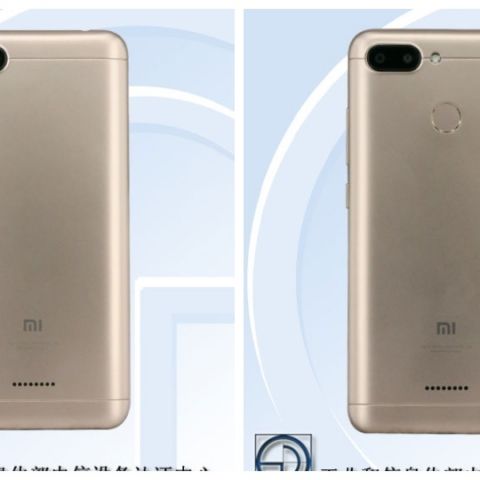 The listing on TENNA suggests that the device might either offer a single or a dual-rear camera setup.

It seems like Xiaomi may be planning to launch a whole bunch of smartphones soon. Following the appearance of the Redmi 6 Plus/Pro, the Redmi 6A has also reportedly made an appearance on TENAA. First spotted by MySmartPrice, the website notes that the listing spans three model numbers, M1804C3CT, M1804C3DT and M1804C3DC. Judging by the images, it seems like the biggest differences between the phones seems to be the rear cameras as well as a fingerprint sensor. The M1804C3CT sports a single camera and no fingerprint sensor, while the M1804C3DT/M1804C3DC sport a dual-camera setup and a fingerprint sensor.

The report adds that the M1804C3CT may feature an 8MP unit, while the M1804C3DT/M1804C3DC may feature 12MP + 8MP cameras. It also notes that all three phones may feature the same set of hardware besides the rear camera. This include a 5.45-inch 18:9 display with a resolution of 1440 x 720 pixels. It may be powered by a Qualcomm Snapdragon 625 SoC with 2GB, 3GB and 4GB RAM options. The device is tipped to feature a 5MP selfie camera, and offer a 3000mAh battery.

The Redmi 6 Plus/Pro was spotted on TENAA a couple of days back. The listing suggest that the phone may feature a 5.84-inch Full HD+ display with a 19:9 display aspect ratio. The device is tipped to be powered by an unknown 2GHz octa-core SoC which could either be the Snapdragon 625 or the Helio P60. The phone is expected to feature a dual 12MP + 5MP camera setup at the back and offer a 4000mAh battery. It is tipped to be available in multiple variants with 2GB, 3GB and 4GB RAM with 16GB, 32GB and 64GB internal storage.

Xiaomi is also expected to unveil its new flagship device in China on May 31. Called the Mi 8, the company claims that the device will be the best camera phone from the company yet, surpassing the Mi Mix 2S. The Xiaomi Mi 8 is expected to feature a 20MP + 16MP dual-rear camera setup with f/1.7 and f/2.0 aperture lenses respectively. At the front, the phone may feature a 16MP unit with a f/2.0 aperture lens. The Xiaomi Mi 8 may also offer 3D Facial Recognition technology, similar to what Apple offers in the iPhone X.