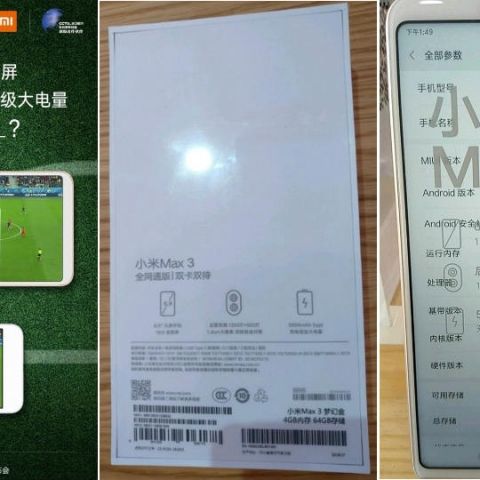 Some photos of the Xiaomi Mi Max 3 are making rounds on the internet showing information on the hardware and the software that the phablet will have.

Last week, Xiaomi confirmed that it will be launching its phablet Mi Max 3 at an event in China on July 19. Now the company has released a poster in which it has confirmed the battery capacity of the phone. According to the poster, the phone will house a whopping 5,500 mAh battery. Apart from the information on the battery, the poster also confirms that Mi Max 3 will have a 6.9-inch screen. There is no notch on the screen and Xiaomi has stuck to the regular thin bezel design for this particular device. Interestingly, Mi Max 3 has upgrades in both departments. Its predecessor, the Mi Max 2 had a 5,300mAh battery and a 6.44-inch size.

Meanwhile, some photographs are also making rounds on the internet which reportedly show a working Mi Max 3 phablet. If we observe the photographs closely, we can see a box with “Max 3” written on it. The second image of the box delves out more information about the phone. It confirms that the smartphone has a 6.9-inch screen with an 18:9 aspect ratio. If we notice the information on the bottom right corner of the box, we can see the smartphone has 4GB RAM and 64GB memory.

There is also a third image which shows that the Xiaomi Mi Max 3 will run on MIUI 9.6 atop Android Oreo 8.1. Earlier reports have suggested that it could be powered by a 1.8GHz Octa-Core SoC with up to 6GB of RAM. We can see in the photo that the processor is indeed clocked at 1.8Ghz but there is no confirmation on the make. It could be the Qualcomm Snapdragon 636. While there is not information on colours, the images show a Gold colour variant. Leaks have said that the Mi Max 3 is expected to be available in Black, Gray, Gold, Rose Gold colours. Mi Max 3 will come with a vertically stacked dual rear cameras and a rear-mounted fingerprint sensor. One of the dual-rear cameras could be a 12MP Sony IMX363 sensor, while the second one is expected to be a 5MP camera with Bokeh shots clicking abilities.