Motorola launches Moto G7 family of phones: Specs, prices and all you need to know 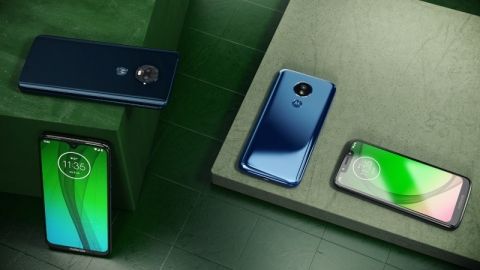 Motorola has launched the seventh generation of its G-Series smartphones in Mexico and Brazil. All the phones in the G7 Series, which includes Moto G7, Moto G7 Plus, Moto G7 Play, and Moto G7 Power, are powered by a Qualcomm Snapdragon 600 series processor, and run on stock Android 9 Pie. The new phones are now available for sale in Brazil and Mexico, while markets like India, the US and Canada are expected to follow the suit soon. The phones will be available in Europe from mid-February. 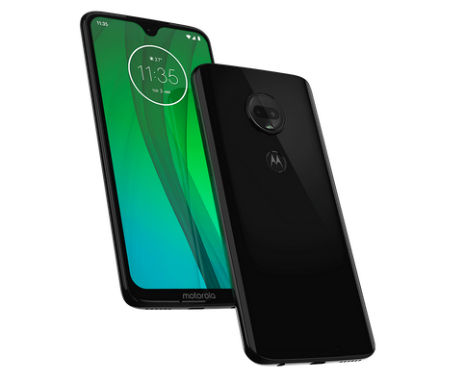 The Moto G7 features a 6.24-inch full-HD+ Max Vision display with waterdrop notch offering 19:9 aspect ratio and 1080x2270 pixels resolution. It is powered by an octa-core Qualcomm Snapdragon 632 SoC clocked at 1.8GHz. The phone is available in only 4GB RAM and 64GB local storage variant. However, the storage can be expanded up to 128GB via MicroSD card. The phone packs a 3,000mAh battery and it comes bundled with a 15W TurboPower charging. In the camera department, the Moto G7 sports a dual-camera setup on the back with a 12MP primary sensor with an aperture of f/1.8 and 5MP secondary lens with f/2.2 aperture. On the front is an 8MP sensor with an f/2.2 aperture. 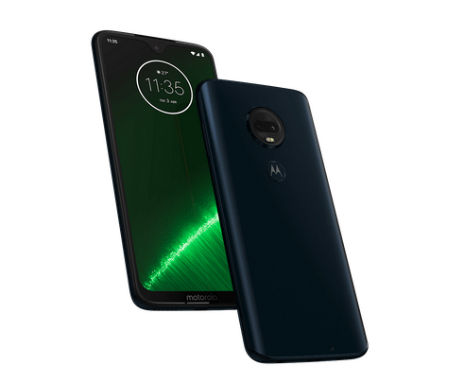 The most powerful of the lot, the Moto G7 Plus features the same 6.24-inch full-HD+ Max Vision display as on the Moto G7. Under the hood, the phone has Qualcomm Snapdragon 636 SoC with 4GB of RAM. The phone packs 64GB of local storage, which can further be expanded up to 512GB. The photography responsibilities are on a dual camera setup on the back with a 16MP primary sensor sensor (f/1.7) and a secondary 5MP sensor (f/2.2). The dual-camera setup supports optical image stabilisation. There is a 12MP selfie shooter with a f/2.0 aperture. Just like the regular G7, the phone includes a 3,000mAh battery. 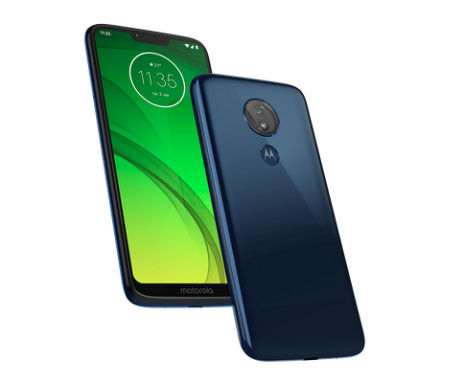 The Moto G7 Power sports a similar display size than the Moto G7 and the Moto G7 Plus. Its 6.2-inch HD+ display offers a resolution of 720x1520 pixels and the phone sports a regular notch. The Moto G7 Power's USP is its massive 5,000mAh battery which the company claims can last for up to 55 hours. The phone features an octa-core Qualcomm Snapdragon 632 chipset clocked at 1.8GHz. The processor is completement by a 32GB local storage with 3GB RAM. For optics, the company has included a 12MP camera (f/2.0) on the back and an 8MP snapper on the front. 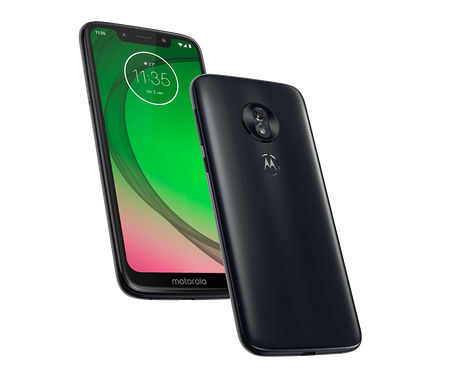 The Moto G7 Play is the most affordable of the lot and sports a 5.7-inch Max Vision HD+ display with 720x1512 pixel resolution. Just like the regular G7 and the G7 Power, the phone has Qualcomm's Snapdragon 632 processor clocked at 1.8GHz under the hood. The processor is coupled with with 2GB RAM and a 32GB of inbuilt storage, which can be expanded up to 128GB. The Moto G7 Play packs a 3,000mAh battery. As far as the camera is copncerned, the Moto G7 Play comes with a single 13MP sensor on the back and an 8MP selfie camera.