Motorola has started sending out invites for its August 25 event to be held in New York. The invite all but confirms the launch of the Moto Z2 Force with a ShatterShield display. The company may also launch the Moto Z2 alongside the Z2 Force at the New Yo 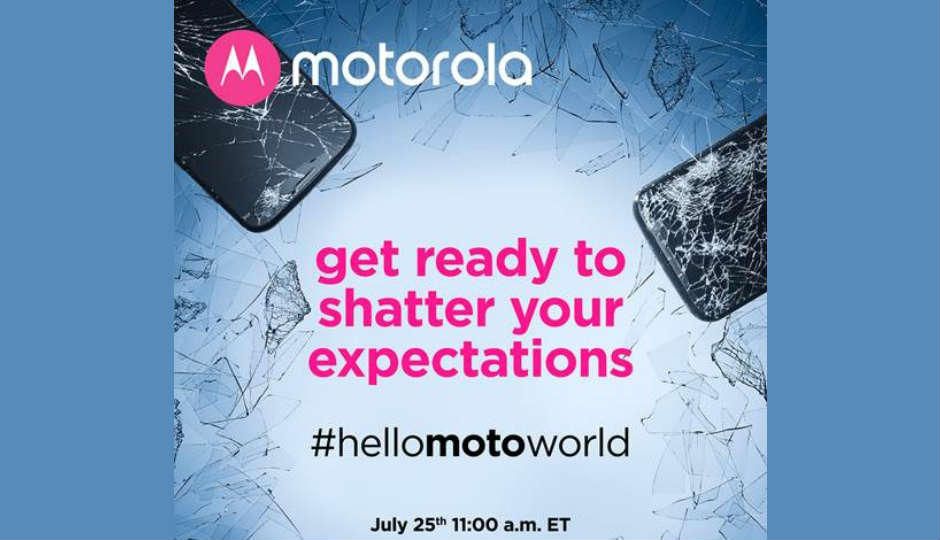 Motorola has been sending out media invites for its smartphone launch event scheduled to be held in New York on August 25. The invite teases the next Moto smartphone possibly bearing a ShatterShield display. The text on the invite reads - “Get ready to shatter your expectations,” hinting at the launch of another shatter-proof smartphone. Speculation suggests that Lenovo owned Moto might be readying to launch the Moto Z2 Force with a shatter-proof display. Moto is also expected to announce the Moto Z2 at the event, which will most likely be the device that makes it to India, since last year's Moto Z Force did not make it to the country here.

Last year, Motorola has unveiled the Moto Z Force with a ShatterSheild display in select global markets. In India, Motorola had launched the Moto X Force with the same unbreakable screen at a price of Rs 49,999, which has since come down close to Rs 20,000.

The current-gen Moto Z Force sports a 5.5-inch AMOLED display coupled with Moto’s ShatterShield technology. ShatterShield gives the device a 5-layer protection against scratches and breakage. The five layers include - a scratch-resistant replaceable lens as the first layer, a primary polycarbonate lens as the second layer, a ShatterShield touch sensor as the third layer, a flexible OLED display as the fourth layer and lastly, a high strength aluminum core.

Other specs of the Moto Z Force include a Qualcomm Snapdragon 820 platform, 4GB RAM, 32/64GB storage, a 21MP primary camera with PDAF, laser autofocus and OIS, and a 5MP front-facing snapper. The entire package is powered by a 3500 mAh battery. The smartphone featured a USB Type C port and a magnetic connector to snap on Moto Mods.

The rumoured Moto Z2 Force is expected to bring back the 3.5mm headphone jack this time around. The flagship device may come bearing the Qualcomm Snapdragon 835 platform, along with 4GB of RAM. It is also expected to keep with the Moto Z family’s modular philosophy. In fact, Motorola may have accidentally leaked the upcoming Moto Z2 flagship smartphone. The handset was spotted on Motorola Chinese web page, and showed the modular smartphone, alongside the recently introduced MotoMods. The device in the image sports a dual-rear camera setup and is believed to be the upcoming Moto Z2 or Z2 Force.

Motorola recently announced the Moto Z2 Play in India. In our review, we noted that the smartphone is worth considering if you're buying a device in the sub-30k price range. It has a good camera, long battery life and an innovative gimmick with modularity.