Moto Z2 with 4GB RAM, Snapdragon 835 chipset spotted on GFXBench ahead of launch

Follow Us
HIGHLIGHTS
Moto Z2 with 4GB RAM, Snapdragon 835 chipset spotted on GFXBench ahead of launch

Motorola is expected to add the Moto Z2 and Z2 Force to its modular smartphone lineup later this year. The company has already announced the Moto Z2 Play and yet-to-be-announced Moto Z2 has been spotted on the GFXBench benchmarking platform. The listing suggets that the Moto Z2 may be powered by Qualcomm's Snapdragon 835 platform coupled with 4GB RAM and an Adreno 540 GPU. The GFXBench specifications sheet also suggests that the handset will sport a 5.5-inch display with a resolution of 2560 x 1440 pixels. It is expected run Android 7.1.1 Nougat with Motorola's own MotoUI customisation. 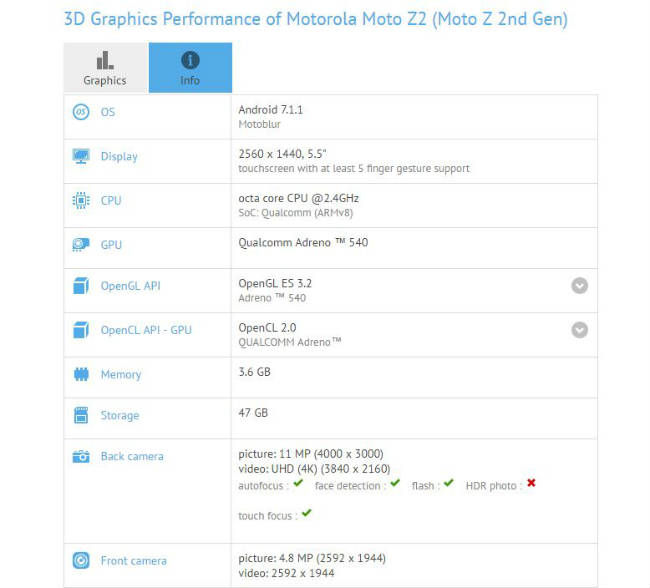 A leaked slide from Motorola's 2017 product roadmap hinted that the Moto Z2 may sport a dual-rear camera setup. The GFXBench listing now reveals that one of those cameras may be a 12MP unit. There will be a 5MP front camera, which could be same as the one found on recently launched Moto Z2 Play.

The details revealed by GFXBench line up with the specifications listed on GeekBench's benchmarking platform. The handset was rumoured to launch on June 27, but it could now be launched on June 30 instead. Motorola has already announced a bunch of new phones this year like the Moto G5, G5 Plus, Moto C, C Plus, Moto E4, E4 Plus and Moto Z2 Play. The company is also expected to announce even more devices like the Moto G5s, G5s Plus, Moto X4, Moto Z2 and the Moto Z2 Force.