Motorola is expected to reboot the Moto X series this year with the launch of Moto X4. The handset is tipped to be a mid-range smartphone and could become Moto's first smartphone with a dual camera system. Motorola is hosting an event on July 25 in New York where it could showcase the Moto X4 which has now made its way to GFXBench benchmarking platform.

A Motorola smartphone carrying the model number XT1789 has been benchmarked on GFXBench suggesting that this could be the 2017 Moto X also called as the Moto X4. While Moto X4 is tipped to sport a 5.2-inch full HD display, the listing reveals the handset is rocking a 5-inch 1080p display instead. The listing seems to indicate Qualcomm's Snapdragon 630 platform, coupled with 3GB RAM and 16GB storage as opposed to claimed 4GB RAM and 64GB storage. 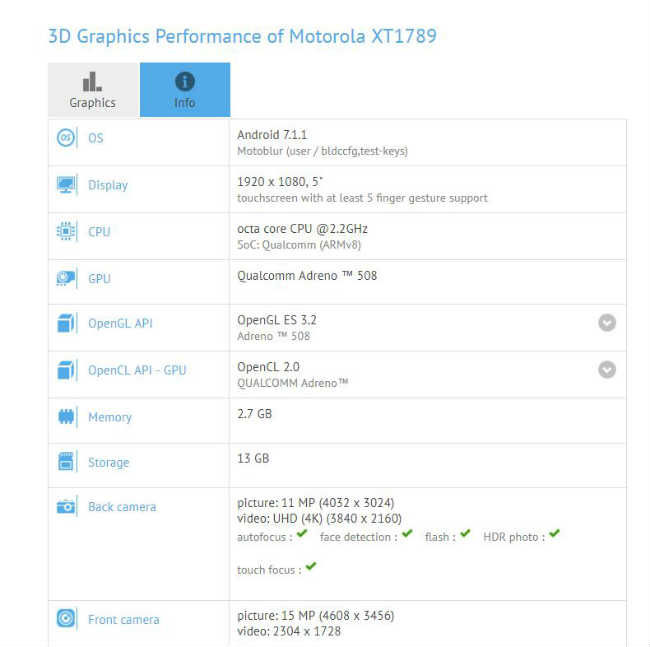 There is a possibility that we are looking at one of the storage variants of the Moto X4 here. The listing also confirms a 12MP rear camera with support for 4K video recording and a 16MP front camera. Previous reports indicate that the Moto X4 will feature a combination of 12MP and 8MP rear camera setup. The benchmark also confirms Android 7.1.1 Nougat and support for Wi-Fi, Bluetooth, GPS and NFC. The handset is also said to be IP68 water and dust resistant, and feature an aluminium unibody casing. Interestingly, it might become the first mid-range smartphone to support Google's Project Fi network. Motorola is also said to be working on a flagship Moto Z2, and mid-range G5S series for 2017.