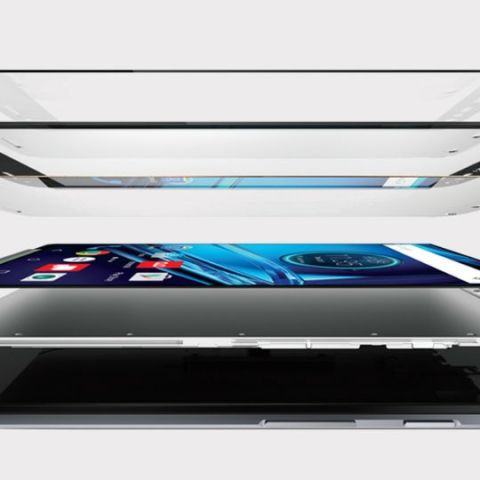 Motorola is launching the Moto X Force in India today. The smartphone has already been launched in the USA as Motorola Droid Turbo 2, available exclusively with Verizon. The highlight of this smartphone is its ‘Shattershield’ display, for which Motorola has claimed trademark. Built with five distinct layers, the Shattershield display on the Moto X Force will reportedly withstand major drops with ease, hence claiming itself to be ‘shatter’ proof.

The Moto Shattershield mechanism uses five layers to absorb shock from hard falls, thus preventing the display from cracking. The innermost layer is an aluminium chassis that forms a structural base, and adds durability to the entire display. The second layer is a flexible AMOLED panel that will render content at a resolution of 1440x2560 pixels. In the middle of the five layers is a dual touch layer. Motorola states that in eventual damage to one touch layer from a heavy impact drop, the second touch layer will allow the user to continue operating the smartphone without any difficulty. The fourth layer is a clear interior lens, which adds more to the strength of the display. The outermost layer is an Exterior Protective Lens, to which Motorola has given a proprietary hardcoat that will prevent the smartphone from succumbing to bruises and dents.

The Moto X Force is also expected to be the most expensive smartphone in Moto’s arsenal till date. Priced at $624 in USA, the smartphone is expected to retail in India within Rs. 45,000. Apart from the five-layered QHD AMOLED 5.4-inch Shattershield display, the Moto X Force will be powered by a Qualcomm Snapdragon 810 SoC, along with 3GB of RAM, 32GB/64GB of internal storage, 3760mAh battery pack and run on Android v5.1.1 Lollipop. This will also make it the most powerful and ‘premium’ smartphone on offer by Motorola, replacing the Moto X Style’s flagship status in India. The Moto X Style was powered by the Snapdragon 808 SoC, along with 3GB of RAM, 16GB/32GB of internal storage, 5.7-inch QHD AMOLED display and a 3000mAh battery pack. It premiered in India at a price of Rs. 29,999.

The Moto X Force will retain the same 21-megapixel primary camera as seen on the Moto X Style, powered by Sony's IMX230 image sensor. It will come with an f/2.0 lens and 4K video recording capability, and the front camera will have the same 5-megapixel image sensor with an f/2.0 lens, and 1080p video recording capability. The launch of the Moto X Force is due today and has the potential to become a popular device, if priced well. After all, we keep dropping our phones more than Sir Ravindra Jadeja drops catches on the cricket field.

Watch Motorola's demonstration of the Shattershield display, below: