Moto E6 with Snapdragon 435 chipset launched in the US and Canada.

It sports a 5.5-inch Max Vision display and 3000mAh battery.

Expanding its entry-level smartphone portfolio, Motorola has launched the Moto E6 in the US and Canada. The Lenovo-owned company has chosen to skip the slim-bezel/notched design and instead went ahead with the legacy phone design, that is, a considerable forehead and chin. The chin sports the Motorola branding and there is no fingerprint sensor. It ships with a 3.5mm jack and FM Radio feature.

The Moto E6 sports a 5.5-inch HD+ IPS LCD display that delivers an 18:9 aspect ratio and 1440 x 720 pixel resolution. The selfie camera is located on the left side of the earpiece on the forehead. On the back is a single camera with an LED flash and a centrally-aligned batwing logo. The back panel has a P2i nano coating which is done to repel water and sweat.

Under the hood, the phone has an Octa-core Qualcomm Snapdragon 435 chipset clocked at 1.4GHz, which is paired with 2GB RAM and 16GB onboard storage (expandable up to 256GB). The company says that the phone is 50 percent faster than last year’s Moto E5. The phone houses a 3000 mAh removable battery with 5W charging, and runs on Android 9.0 Pie. 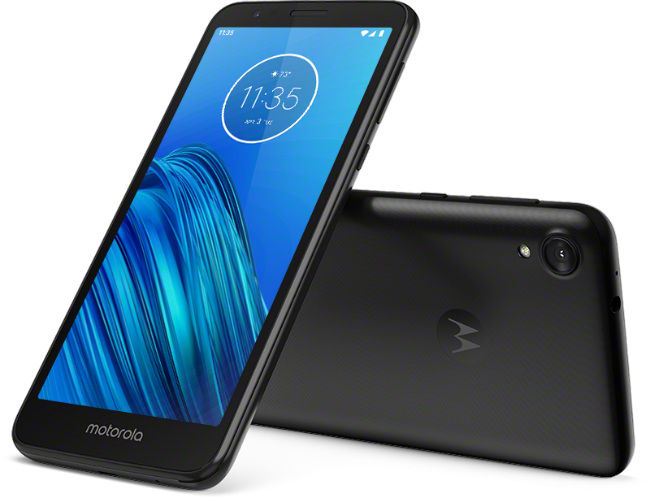 Additionally, the Moto E6 has Moto Experiences that are found in other motorola devices. These include turning the flashlight on with a simple chop-chop motion, and Screenshot Editor. New experiences also include Media Controls and One Button Nav, which were previously only on higher tier devices.

In the camera department, the Moto E6 has a fast-focusing 13MP rear sensor with 1.12um pixel pitch and a lens with a f/2.0 aperture. It is capable of shooting 1080p (30fps), 720p (30fps), Timelapse and Hyperlapse videos, and support digital zoom (up to 8x), burst shot, Auto HDR, portrait mode and Google Lens integration.The 5MP front sensor has the same pixel pitch and lens aperture as the rear camera. It can also shoot Timelapse videos.