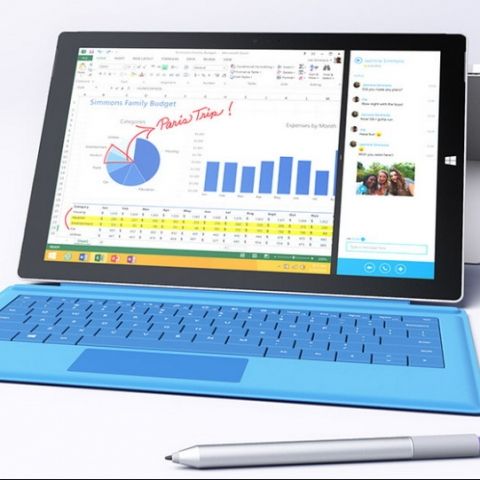 Wowing to completely replace laptops with its latest tablet, Microsoft finally unveiled the new Surface Pro 3 tablet at a press event in New York city. The company's Surface Chief, Panos Panay, says that it is designed to remove the conflict of buying a laptop or a tablet.

Surface Pro 3 is thinner and lighter than its older siblings. It weighs only 800 grams and is around 9.1mm thick. Microsoft claims that it is the slimmest Intel Core product ever made. In reports of various hands-ons with the device, Surface Pro 3 has been reported to feel remarkably light in hand. It also comes with a brushed metal body which is quite sturdy. It is even lighter than the 13-inch MacBook Air and Microsoft claims that its 30 percent thinner than an 11-inch MacBook Air.

In terms of specifications, the top-end model of Surface Pro 3 features a 12-inch ClearType Full HD display, 4th generation Intel Core i7 processor and 8GB of RAM. Microsoft promises nine hours of web-browsing battery life with this device. It also features a new and completely redesigned Surface Pen which is supposed to "deliver a precise, luxurious drawing and note-taking experience." The display is sharp with an incredible 2160x1440 resolution and features a 3:2 aspect ratio.

Previous rumours had suggested that Microsoft will launch a Surface Mini tablet at the press event. That has not been the case. The rumours about the Surface Pro 3 have been true though.

The new Surface Pro 3 comes with a new kickstand and Type Cover combination. The new kickstand now supports a "canvas mode" that places the Surface Pro 3 at multiple angles for use either as a laptop or a tablet. The new Type Cover attachs to the Pro 3 magnetically and provides more sturdiness. It will also help users use the Pro 3 at an angle so that they can use it on their lap. Microsoft has also added a new larger trackpad to the Type Cover which could help improve the mouse input in the new tablet.

The Surface Pro 3 runs Windows 8.1 Pro that includes Microsoft Office for business customers. Users will be able to multitask with the side-by-side windows feature. It also features a full-size USB 3.0 port, microSD card reader and Mini DisplayPort for quick file transfer and connections to other devices.

Starting at $799, Surface Pro 3 will be offered in multiple configurations featuring 4th-generation Intel Core i3, i5 and i7 processors. The Intel Core i3 model starts at $799, a Core i5 version starts at $999 and the top-end Core i7 model starts at $1,549. Users will have options to choose from 4GB to 8GB of RAM and four additional storage options - 64GB to 512GB.

Customers can pre-order the Surface Pro 3, Surface Pro Type Cover and Surface Pen from today through Microsoft Store. The company says that more configurations will be available during August and additional accessories will be made available in the next few months. Microsoft has not mentioned India in the list of countries where it is looking to make the Surface Pro 3 available for purchase by the end August. Hopefully, we will see the launch of the device here soon after.