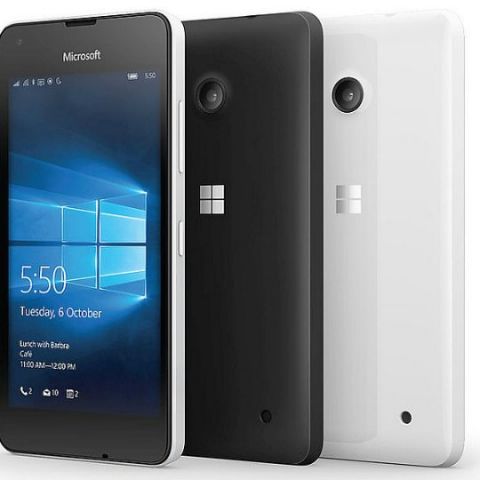 The Microsoft Lumia 550(₹ 4999 at amazon) has been launched in India for Rs. 9,399 and will be available from December 23. The device is the company’s cheapest device to come with Windows 10 for Mobile and will be available in Glossy White and Matte Black variants. The device comes with a 4.7-inch HD display and is powered by a 1.1GHz quad-core Qualcomm Snapdragon 210 SoC with 1GB of RAM. It comes equipped with 8GB of onboard storage which can be expanded by up to 200GB. There is a 5MP camera at the back of the device while at the front is a 2MP camera. The Lumia 550 has a single Micro-SIM slot and is 4G capable. It comes with a 2100mAh battery, which Microsoft says can deliver up to 16 hours of talk time.

The Lumia 550 doesn’t support certain Windows 10 features like Continuum and Windows Hello as it doesn’t meet the hardware requirements for these features. However, it does come with Microsoft Edge browser, the revamped Outlook mail, Cortana digital assistant, Glance Screen, and more.

It seems like these three devices will be the only ones come with Windows 10 for Mobile as the update for last generation Lumia devices has been delayed till next year. The update was supposed to come this month and Microsoft hasn’t confirmed the reason behind the delay.