Microsoft unveiled a bunch of new devices at its Surface Hardware event and one of the announcements was the new Surface Neo. The company has unveiled a new lineup of dual-display Surface devices, which currently comprises of the Surface Neo and the Surface Duo. The Surface Neo sports two displays that are connected together with a couple of hinges that enable the device to unfold 360 degrees. In addition, Micorosoft unveiled its new Windows 10X operating system, which is designed with dual-screen PCs in mind, along with truly wireless Surface Earbuds.

The Microsoft Surface Neo comes equipped with two 9-inch screens that when unfolded, turn into a 13-inch display. These displays aren’t seamlessly attached since they are held together by two hinges and there are notable bezels between the two screens. However, Microsoft showed off the device running on the new Windows X operating system specifically built for dual-screen devices. From the device’s demonstration at the event, it seems like most tasks will be handled on one screen and not many apps might be able to span across both the displays.

The Microsoft Surface Neo is powered by a custom Intel Lakefield processor and it sports a new thin Surface Pen that is magnetically attached to the back and charges wirelessly. There’s also a magnetic keyboard that folds out from the rear and straps onto one of the device’s screen. It leaves some space on the display where it is attached so that it can be either used as a secondary display or a touchpad. After Microsoft, companies like Asus, Dell, Lenovo and HP will also be coming up with their dual-display products.

The new Microsoft operating system for dual-screen devices plays a central role in enabling Surface Neo’s functionalities. The OS is said to be a ‘natural member’ of the current Windows 10 family that also supports running Win32 applications in a container. Additionally, making use of componentization and other elements, the company made the OS capable of supporting more input types, hardware postures while managing Windows applications and taking care of how they consume the battery. Windows 10X will be available on dual-screen and foldable devices in fall 2020. 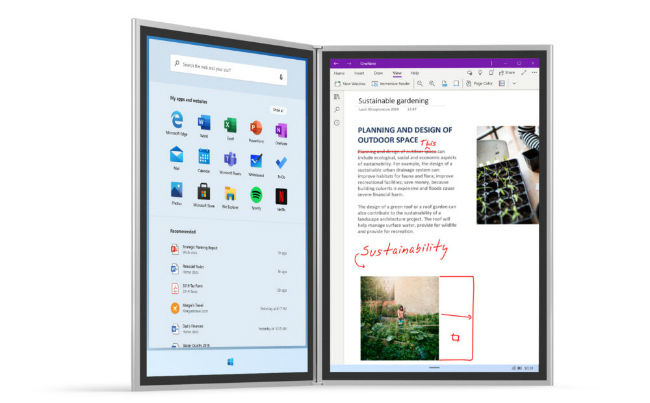 Microsoft has also forayed into the truly wireless earphones segment with its Surface Earbuds. The new earbuds feature touch and voice controls and come equipped with two mics per bud. It has filters for better noise reduction, features ‘omnisonic sound’ and with touch sensors on both the earpieces, one can control music, volume and calls too. The device is touted to deliver 24 hours of battery life and one of the more notable features it comes with is the Office 365 integration that will enable users in the US to access Outlook calendar and email via voice commands.

There’s also a live caption and translation feature on the earphones, which works with Powerpoint by employing Microsoft Office and Azure services. The Microsoft Surface Earbuds are priced starting at $249 (Rs 17,682 approx).